Two roads diverged in the woods...
I took the one less travelled by.

I've been doing a lot of walking in the woods in the past three days, and not through your depressing pine plantations either, but real "English" deciduous woods of beech and birch with the sunlight filtering down and reflecting on the leaves. (See the photo below.) And more often than not I've been taking the road less travelled by, sometimes walking along trails overgrown with grass and climbing over fallen trees that block the way. In three days I have not met another walker, neither pilgrim nor rambler.

On the first day, at a place where two roads met, I took the one more travelled by, thinking that it was the logical choice. And that made all the difference! We walked 15 kms out of our way. Now had my GPS been working....

Apart from allowing me to vent my spleen, it may prove instructive to anyone else thinking of using their phone overseas.

Because this a lonely route and not always well marked, I decided to use the GPS on my iPhone. I bought an overseas data package - 50 megabytes for $125. Bloody expensive, I know, but better than using the phone without one and ending up with a bill for $35,000 like the woman from BC.

Anyway, I arrived in France and the phone didn't work. To cut a long story short, my dear wife, Marcelline, phoned Bell, only to be told that I must call them, collect, from France. It turned out that someone at Bell had forgotten to turn a switch to set up my service. The cost to Marcelline? Several hours of wasted time on the phone with Bell, and much frustration. To me? Even more frustration from spending many hours trying to get the phone to work, losing most of the credit on my French cell phone because the "collect" option didn't arise, and walking around in circles for 15 kilometres. But my iPhone is working now, and I'm using it sparingly for its GPS. There, I've vented, and can let it go.

But the thing to remember if you are setting up a package to use your Canadian phone abroad? Make sure they take off the International restriction on your phone.

Some French villages have a sparkle about them. Varzy didn't, where we spent last night, and nor has Chateauneuf (not du Pape) where we are staying tonight. The region is quite depressed, I think, with businesses closing down and the young having to move to find jobs. The prices of houses are ridiculously low with a nice bungalow selling for 100,000, and fixer-uppers for as low as 19,000 euros. That's a good indication of the state of the local economy.

Yesterday was my birthday. Thanks to all those who sent birthday greetings and sundry best wishes. To celebrate, I had a beer with my walking companion, Patrick.

I suppose that there is some satisfaction in having exceeded one's Biblically allotted span.

Now of my threescore years and ten,
Seventy one will not come again. 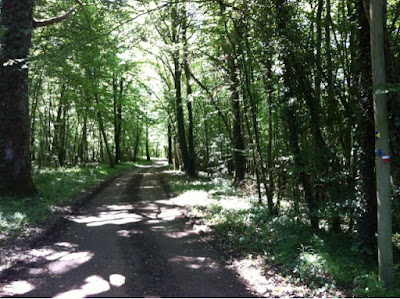 Posted by Carolus Peregrinator at 09:32