Berryman and Baxter,
Prettiboy and Penn,
And old Farmer Middleton
Are five big men.
And all of them were after
The Little Black Hen.

Yesterday, I visited the cathedral at Bazas. On the outside, it is rather unappealing. A tower on one side throws it off balance. But inside it is magnificent. It is not in the form of the Latin cross, but a simple basilica, the nave leading to the altar and ending in chapels around the chevet. Some cathedrals move me, others don't. I sat in solemn stillness for half an hour and marvelled at its simple beauty - the columns, the stained glass, the vaulting. How could I be alone in this great work of art for such a long time? Could one do this in front of the Mona Lisa?

I spent the night with a very religious couple, and I think they expected a very religious pilgrim. Patrick the Belge had given me their number without telling me this. Catholic mags were stacked on the desk in my room. I could have read them till kingdom come. And they were in the loo as well. At dinner I felt like Holden Caulfield when Catholics would ask him about mass to find out if he was a Catholic. "Are they mainly Protestants in British Columbia?" they asked me.

They lived out of town and were very surprised when I asked to be taken back to the cathedral where they had picked me up. Was I sure?" they asked at least three times. And I was surprised to find that this was unusual. I mean, how can you say to yourself, "I walked to Santiago except for the three kilometres where I rode in a car?"

After leaving Bazas by a main road, I walked for many miles along a discontinued railway line. France had its Beeching too.

As I walked over the buried sleepers and lengths of rail, and kicked the rusty old plates and bolts, I imagined a steam train chugging towards me. I remembered that great film with a sooty Burt Lancaster switching a train onto a different track to save the art treasures the Germans had stolen from the Louvre. One to watch again when I get home.

Then I came upon some chooks scratching happily in the sand. They had wandered over from a neighbouring farm yard, and were scratching for grubs in the dirt.

Ode to a Chook

Chooks in sand are as happy as pigs in muck. And chooks, like pigs, should enjoy this freedom until it's time for the chop. It is evil to keep them in cages.

I met the French group at lunchtime at Captieux. They were sitting at a bar, having a beer, and about to eat lunch. I asked if they had visited the church. First things first, they said. I said I had met very few people on this route. Ah, they said, but the people you have met "sont les gens de qualite".

We still had about nine kilometres to go in the afternoon sun before we reached our gite. There was no way I would eat a heavy lunch with that ahead of me. But the French are French. First things first.

Tonight the seven of us are at a gite quite literally in the middle of nowhere.

In the picture below, the disrespectful gent in the back row of the cathedral who has not removed his hat is not me. My Tilley is perched on top of my sack. 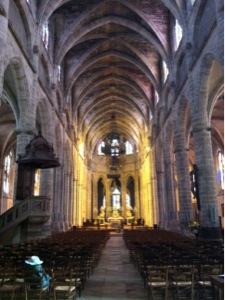 Posted by Carolus Peregrinator at 20:06