If you go out in the woods today,
You're in for a big surprise.

We spent much of the day in the woods again in almost unbelievable peace and tranquility. We walked through all kinds of trees from scrubby poplars to stands of mighty oak that would once have furnished the French navy with masts. Not a soul to be seen nor a car to be heard! We noticed in the guest book at the gite that the last person passed this way three days ago.

We forget that in densely populated Europe there are vast areas of wilderness. Most people live in cities. I remember once walking along the Pennines without seeing a soul all day and thinking that a few miles away on either side were the industrial cities of Yorkshire and Lancashire.

And the surprise? Arriving at a little village to find a bar open where we could get a coffee. "Nay, Chas," Patrick had said, "There won't be anything open here." But, there was! And the name of the village? Chasnay. Amused by this fortuitous play on words, I then noticed that the bar was called LE CHASNE. "Is this a pun on the name of the village?" I wondered. "No, look inside," said Patrick. The walls were covered with hunting trophies. "It's a play on 'la chasse'." Intrigued, I asked the person behind the bar, "Le nom de votre bar, c'est un jeu de mots avec le nom de vote village ou la chasse?" "Neither, " she said, it's the name of the former owner." Ah, I thought, a quadruple coincidence. There's a moral here somewhere.

Today we are following the GR (Grande Randonee) and not our pilgrims' route. I should explain that there are two routes: the GR, also called La Voie de Compostelle, and La Voie de Compostelle which supposedly follows more directly the pilgrims' path. I'm following the latter because the distance to Saint-Jean-Pierre-de-Port is 900 kms rather than more than 1,000 by the GR, but last night on the toss of a coin we detoured three kms to Chateauneuf (on the GR) where we knew there was a restaurant.

In the afternoon, we came out of the woods into the heat of the sun. It was 29 degrees. We walked through the fields into La Charite-sur-Loire. We are staying tonight at another municipal gite.

I walked down to the bank of the river. We are well upstream from chateau country, but the river is still very wide, unlike the little stream that I crossed near its source on the Chemin de Stevenson some years ago. We are now eating outside at a restaurant as night falls. 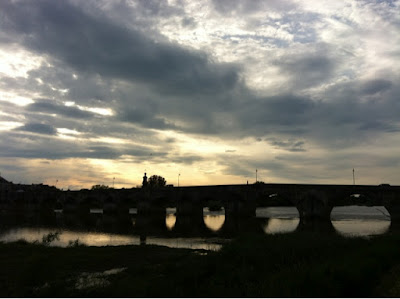 Posted by Carolus Peregrinator at 08:25