I am too much in the sun

Until now, it has been cool in the mornings when I set out, but today it was overcast and muggy as I left the gite, and it got hotter as the day advanced. It was a comparative short step, but as I walked the last few kilometres along the road into La Reole, the heat was coming up through the ever-thinner soles of my Keens.

Last night the hospitalier produced a superb vin de pays. When I asked where he'd got it, he tapped his nose and said he had a source. Later, the French agreed it was a very fine petit vin. I asked them whether it was a vin de or a vin du pays, and they became very excited and launched into a lengthy discussion about the nuances of the language. In short, it was both.

They are moving slowly from their home in Charente to Santiago, one week at a time. As usual, there are the connections: one has a nephew in Perth; another, a friend in Nelson, BC. Today, at lunchtime, they made a detour to a chateau for a wine tasting. They invited me to go with them, but I declined. I knew that I wouldn't want to continue afterwards. They arrived in town about five-thirty, so they must have had a good day.

This morning, I saw someone on a tractor clipping off the tops of his vines so that more of the growth goes into the grapes. I didn't want to mention it yesterday while I was waxing poetic about the vines, but I noticed that a farmer was spraying with some sort of pesticide that I tried to avoid breathing. I remember Patrick, the former mayor of a commune near Toulouse, telling me last year that we would be horrified if we knew what noxious chemicals went into the making of wine.

On the way out of the little village of Coutures, I passed the ruins of the 12th century castle of Caze. (See picture below.)

Tonight, I'm in La Reole, a town on the bank of the Garonne, which is, after the Loire and the Dordogne, the third of the great rivers to cross. 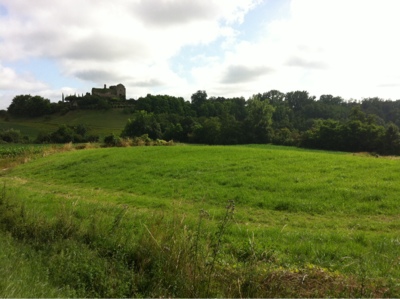 Posted by Carolus Peregrinator at 12:13