Have thunder and lightning their fury forgotten

I got caught in a storm today. As the rain came down and the thunder rolled around, I remembered learning at school that sound travels at 1100 feet per second and for every five seconds between the the flash and the crack the lightning is a mile away. Fortunately, today it was further than that, and I passed through without incident. It wasn't much fun being the tallest object in a flat field during a storm!

I would love to sing the St. Matthew Passion again in English, but it's not likely to happen. These days, choir conductors are purists, and don't realise that the English translation might sometimes be as good as the original, especially when the choristers don't understand the original. In the Passion much of the text comes from the Bible anyway, and it doesn't get any better than the King James. And as for the rest, well, lines such as

The Christian soul bewails the frailty of mankind

have a nice ring to them. I would love to sing them again.

Last night I stayed in a garret at the St. Catherine's Hotel in Issoudun. 23 euros. It was a good deal, but to reach my room I had to climb one of those circular staircases with long, narrow, triangular steps which come to a point at the axis. I was on the second floor, and the second series of steps was even more treacherous than the first. I had to cling to the rail and keep to the outside. Evidently, the price of the room went down as the steps went up. Had there been a third floor, the price would have been 13 euros.

I set out. As I sat on a bench in front of the little church at Thizay, another pilgrim appeared, a Dutchman, Rinie, who had set out from Holland in mid-April. He is only the second walker I have seen since Vezelay. We walked together for a while, parted company, and then met up later at the gite.

In the afternoon, I walked into a fierce wind. It tugged at my Tilley, and twisted my map holder into a frenzy until it had me by the neck in a stranglehold. I escaped, and from then on, held it in my hand, reciting my mnemonic to myself every time I stopped, to make sure that I wouldn't leave my map behind. "Please, God. Where am I? Help a lonely traveller."

In the late afternoon I walked along an interminable highway, and through a military complex that stretched for at least a mile on both sides of the road. I noticed a building dated 1939. They must have built it for the Germans.

Finally, I reached Deols. We are staying at a municipal gite - very comfortable and only five euros. I am absolutely buggered. Today was the hardest day.

As I walk through fields and fields of grain, I am struck by the simple beauty of the red poppies, blue cornflower, and white daisies along the verge. Here's a cluster against the barley. 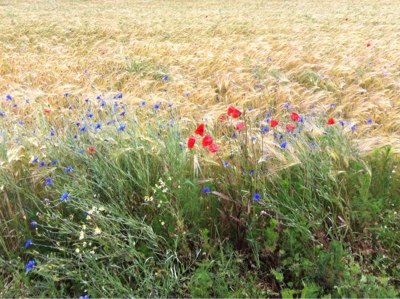 Posted by Carolus Peregrinator at 12:06