Lady in carriage: Sir, you smell.
Dr. Johnson: Madame, you smell. I stink.

The gite last night wasn't exactly a "Gite de France", as one of the French put it. Neither the plumbing nor the wiring would have passed an inspection. The lights dimmed whenever you plugged in an appliance. And there was a lingering odour from the septic field. We were all bitten by mosquitos. One of the French ladies was stung by nettles and pulled off a couple of ticks.

It was run by a very old woman, who, bent double, fussed around, dealing out her supplies very carefully. She was a shrewd businesswoman doing very well out of the pilgrim trade at 20 euros apiece. "Who hasn't paid," she said, after counting her money.

But we made the most of it. The French were kind enough to invite me to dine with them. We ate outside, ham, pasta, fruit salad, a la bonne franquette.

This morning we left just after seven, and made very good time along a sandy track. The only jarring note was the thundering sound of the French air force flying overhead. Apparently we were near a base. I was lucky enough to find a coffee at Bourriot-Bergonce. Thence, it was a steady slog into Roquefort, which, I was disappointed to learn, has nothing to do with the cheese.

The French are taking a taxi tonight to the station to get a train home. Next year they will take up where they left off and walk for another week. They are in no hurry to get to Santiago. More important is the pleasure they take in each other's company and the experiences along the way. I wish them well.

Tonight, together with the Dutch lads, I am in a gite run by the pilgrims' association. No meal provided, but there's a bar up the street offering a pilgrim's menu.

I was unable to see inside the Romanesque chapel at Ligaut, which, I read, has some magnificent frescoes.(See picture below.) 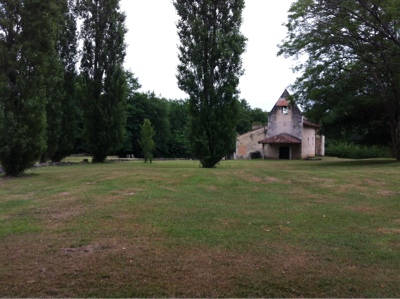 Posted by Carolus Peregrinator at 08:34