It is the bright day that brings forth the adder

I have met a few more pilgrims. At the gite last night was a Frenchman with his porter, that is, his wife, who was following him with their car and carrying his stuff. They would meet up each evening at a bed and breakfast. I just saw him again inside the church at Saint-Leonard.

And this afternoon I met a French couple who almost stepped on a snake. They didn't know whether it was an adder, but they said it reared up quite threateningly. Since then, I've been on the lookout.

When I was walking the Pennine Way, I was warned to be careful when climbing over dry stone walls. The adders liked to come out and sun themselves. I almost stepped on one on a stone in Cornwall. Shakespeare knew what he was talking about.

For the last ten kilometres yesterday afternoon, and much of today, I have been walking along the main road. To relieve the monotony, I march like an automaton and lose myself in my thoughts. Of course I have to be ready to leap off the road into the nettles or brambles or electric fence if I'm threatened by a car.

I have been thinking about an article in the Guardian sent to me by my friend Juliet in response to my post about the lines from my mother's poetry book. It seems that Michael Grove, the education secretary in the UK, wants to introduce a rigorous new curriculum for primary school students, with greater emphasis on spelling, grammar and phonics. It sounds like the curriculum in place 60 years ago!

What really interested me is that under this new curriculum, children will be expected to learn poetry by heart and recite it. It's an idea, surely, that few will disagree with.

I remember having to recite a poem to the class in Standard Four at East Claremont Practising School, "Prac" as we called it. I chose a poem which must have surprised the teacher even then, just after the war. I say it now with great pleasure.

There's a breathless hush in the close tonight,
Ten to make and the match to win.
A bumping pitch and a blinding light,
An hour to play and the last man in.

With its jingoistic theme and British sentiments, I could never teach it to my own students, but I often quoted part of the second verse as a fine example of alliteration and assonance. Listen to the d's and r's and the repetition of other vowels and consonants.

The sand of the desert is sodden red,
Red with the wreck of the square that broke.
The Gatling's jammed and the colonel dead,
And the regiment blind with dust and smoke.

There are many poems which are fun to say aloud. Whether it's

or any of those other great-sounding classics of rhyme, rhythm and repetition, there is something for every age, and most children will enjoy the experience of reciting the poem aloud, and will remember it forever.

Along the way I pass many religious symbols that must have been full of meaning to travellers of yore: crosses, shrines, cairns, and of course the churches, in which every pilgrim would have said a prayer. Today in the woods I passed a curious but spectacular pilgrim's welcome. "Ultreia" is the traditional pilgrim's greeting and encouragement. (See picture below.)

I am now in Saint-Leonard-de-Noblat, an unspoiled medieval town with winding streets, a huge church, and few tourists. 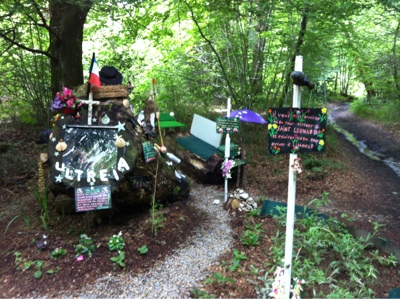 Posted by Carolus Peregrinator at 08:29