Swans sing before they die - 'twere no bad thing
Should certain persons die before they sing.

Able was I ere I saw Elba

This morning I climbed the steepest hill so far on my walk: up from the campsite into town. The Hollanders had gone on, and avoided this little detour, but I needed my coffee.

Thiviers is a thriving little town. Even along the winding streets in the centre of the old town, cars are whizzing by, and at eight o'clock, people are out and about. Dogs are taking their masters and mistresses for their morning walk. One banner across the town square announces that the firemen are hosting a grand ball. Another invites people to give blood on Saturday morning. An ensemble d' accordeons is to give a concert in the church and the Choeur d'hommes du Perigord is to perform as well. I look at their photo and see that they are all old blokes like us in the Arion Choir. Where are the young singers?

The sun is shining, and the display on the innovative flashing green cross of the pharmacy tells me that it's 9:10 and 20 degrees. It's time to move on.

After leaving town, I walked along shady lanes and across the fields. In the picture below, you can see alfalfa on the left and barley on the right. An oak stands on the left; a chestnut, on the right. And you can probably see the poppies in the foreground.

For the last part of the day, I walked along la Route Napoleon, presumably the route he followed when he came from exile to meet his Waterloo. I continued on this road into Sorges.

As I did two nights ago, I am staying at a gite run by the pilgrims' association and managed by volunteers. All is included for 20 euros.

By the way, I don't agree with Coleridge. If I did, I'd be dead. 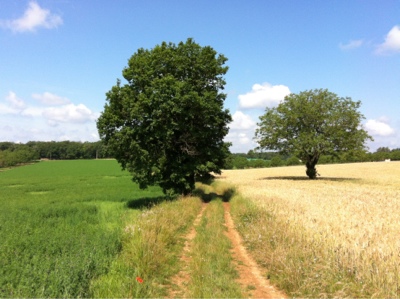 Posted by Carolus Peregrinator at 07:12