As I left the gite this morning, I witnessed a couple employing a curious means of locomotion. He was heavily laden like a mule, and she was hitched to a little cart like a donkey. I'm not sure, considering the physics of it, who had the better of it. She would have been propelled down the slopes, but he would have had it easier going uphill. In any case they would have been limited to the roads.

And in the afternoon, I came upon a curious juxtaposition of signs above a gate which held back a pack of barking dogs. The first said: "Attention au chien". The second said: "Defense d'entrer". The third said: "Bienvenue". I was going to take a photo, but a woman appeared and threatened to set the dogs on me.

Then I passed a field of corn prevented from straying by an electric fence.

I walked a long way today and now I've made up lost ground. And I've got a bed at the municipal gite.

Last night I slept in a feather bed, and tonight I'm with the gypsies, O

So to speak. Last night I had a bed with sheets in my own room. Tonight, I have the last lower bunk in a small room with four doubles.

It was cool and overcast as I walked along the highway in the morning, but in the afternoon the sun shone and I strolled along a shady lane with woods on either side. Once again, I was taken by the magical light. 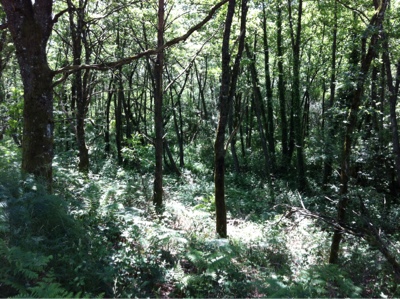 Posted by Carolus Peregrinator at 09:27