But there's nothing so lonesome, morbid or drear...

Just after nine this morning, I was standing, not in, but outside, a bar in the little village of Cuzion, 5 kms on from Gargilesse. I had left early, without having eaten, and was desperate for a coffee and perhaps a croissant or two. I was chatting with one of the inhabitants, who was waiting for his bread.

"En principe, c'est ouvert," he said. But it wasn't. At the entrance to the village, a sign had advertised "Multi Services". But there weren't. There was only one. And it wasn't open. He explained that 20 years ago there were five bars around the spot where we stood. There used to be 200 people in the village, now there were 30. There was a bakerery, butcher's, grocery store, lawyer's office, and so on. Now there was just the one bar. And it wasn't open. Such is the fate of many villages all over France.

He pointed to the epicerie he used to own. It was all boarded up. His children were scattered all over France. His wife had died. "So now you're alone," I said. "No," he replied. "J'ai une amie. But I'm 81." Such is life.

Then the woman arrived and opened the bar. I ordered a coffee and some croissants. She didn't have any. A baguette? No, all the bread was spoken for. But she made me some toast for breakfast. Fortified, I pressed on.

At Eguzon, the next town, I bought a baguette and two croissants, and had a second coffee. I also bought some more compedes for my blisters.

Then I pressed on to Crozant. Thus was my day divided into three parts.

Crozant is a bigger village, with a restaurant and shops. I'm staying in a room above the restaurant. The village's main attraction is the ruins of a fortified castle which controlled the crossing of the Creuse in the middle ages.

Again, a good part of the day was off the road. The weather continues to be cool with showery spells.

The photo du jour is for my old mate in Victoria who has a penchant, not for sheep, but for cows. I have called the picture "La vache qui sourit". 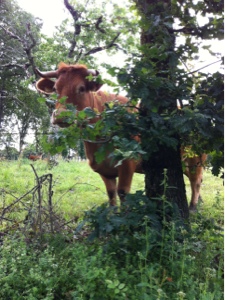 Posted by Carolus Peregrinator at 07:09