Under the spreading chestnut tree

As I sing the song, I remember seeing a film clip of King George VI with a troop of boys at a scout camp. He was obviously enjoying himself as he sang the song and did the movements - spreading, chest, nut, tree - a bit like those of YMCA, which I can never manage. He was probably still the Prince of Wales, with little idea of the turmoil that lay ahead. How fate can throw a spanner in the works of life!

For some days, I have been walking through hilly pastoral country, with the occasional field of grain, and lots of chestnut trees, sometimes alone, sometimes in groves, and sometimes in small plantations. No vineyards yet.

Last night I stayed with Madame Fevre, a former phys. ed. teacher who was on the list of individuals welcoming pilgrims. It was a very pleasant stay, rudimentary but correct, as the French would say.

It took some time to get out of the city this morning. At one stage, I had to walk on the road to get around the cars parked on the footpath. That's not uncommon in France. Although a small city, Perigeux has its suburbs which stretch out along the roads leading into town. Then, for want of alternative marking, I found myself following the GR along the river for a while. This was a pleasant diversion, but it added a couple of kms. Then I was in the woods again for the rest of the day.

There is something very, very pleasant about taking a break for lunch in the middle of the day. I always make sure that I've covered more than half the distance before I eat. Food can sit heavily in my stomach during the afternoon. I am sitting by the side of the road, leaning against an oak tree, munching a baguette and the last of my sweaty cheese. For some reason, I think back to sitting beside the highway against a gum tree in Wodonga, Victoria, 50 years ago. There, I would have been listening to crows and magpies and kookaburras, and fighting off the bush flies. Here I am sitting in silence, but for the wind in the trees and the occasional call of a songbird. Midday is a lazy time for the birds as well. And the wind is strong enough to keep away the mosquitos, which are plentiful in the woods. I have the bites to prove it, unless they are from bedbugs.

I stopped for un petit cafe at the pleasant little town of Gravelle, only eight kilometres from my destination.

After Gravelle, I walked beside the river Isle, and then a canal. (See picture below.) It doesn't get much easier than walking beside the water. It's flat!

The main road into town runs beside a steep limestone cliff which has been quarried out into huge caves which are now occupied by the army, the gendarmerie, and various private enterprises.

The monotony of the last three kilometres into town was relieved by a colourful, welcoming floral display. (See picture below.)

I'm staying at a chambre d'hote a couple of kilometres out of town. I have my own room, and for supper we'll be eating lamb chops and freshly gathered mushrooms. It sounds very promising. And who else should be here but the Dutch. 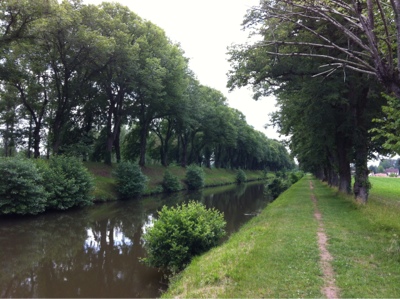 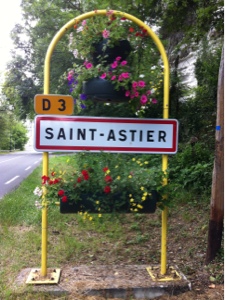 Posted by Carolus Peregrinator at 13:03