Thus spake the hospitalier as she served the cheese. And a good selection it was, augmented by Daniel's favourite, Comte, which, we decided, smelled like his father's socks. It was a good meal all round. Salad, chicken and pasta.

We were five around the table, along with the two hospitaliers.

Daniel is Dutch, and spent some time studying in Nanaimo. He is very technologically savvy, and spends much of his evening on his iPad, twittering and blogging and planning next day's route.

Carl, his father, whose real name is Carolus, Is a wiry fellow with a gesticular sense of humour.

Louis from Brazil is doing his fourth or fifth camino and is a little the worse for wear. He's the only fellow who arrives after me, sometimes several hours later. When I first saw him I thought, Ah, here's someone older than I am, but it turns out he's only 65.

And then there's Christian, a young German student, doing classics. I was interested to learn that he's going to be a Latin teacher. I asked whether he would easily find a job. No problem, he said, Latin is considered a very important subject in Germany, not only for historical reasons, but because it encourages critical thinking.

Now isn't that interesting! The English-speaking world has replaced Latin with more relevant and practical subjects, whereas the Germans have kept it up because it trains the minds of the future generation? Are they so far behind us or way ahead of us in their thinking?

I spent most of the day walking in the woods, coming out only at the outskirts of Perigeux. I passed a few ladies looking for mushroooms. It wasn't the season (September, October) but they had found a few after the rain. Then I stopped to chat with a friendly fellow with a friendly dog. I make a point of responding to friendly dogs. They are few and far between. He, the man, not the dog, told me where I was on my map.

The problem is that there are several chemins de Vezelay. First, there is the "historic route", which I am following, with my guide. Then there is the route devised by les Amis de St. Jacques in the Limosin-Perigord region. The markers of these two routes are almost the same with the yellow arrow and the Coquille de St. Jacques, but the routes don't always coincide. Then, of course, there is the GR, which joins us for a while on most days, and then grand-old-Duke-of-Yorks it off into the bush somewhere. Ultimately it doesn't matter which route you follow as long as it's direct and avoids the highway. But I like to know where I am, and that's what the fellow with the dog was telling me.

I arrived in Perigeux about two o'clock, visited the cathedral, and then walked out of town to the place where I'm staying. Having stayed here a few nights ago, Patrick had put me on to it.

Today's picture is of a Ukrainian well deep in the heart of Perigord. (Some people have wondered if I were poking fun at Ukrainians. Not at all! Wells like this can be seen in many Ukrainian towns in Manitoba.) 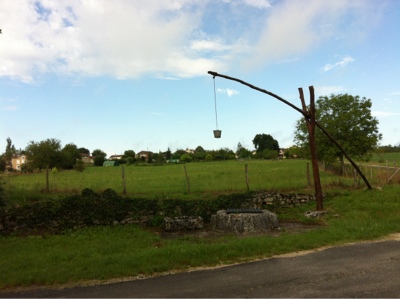 Posted by Carolus Peregrinator at 05:23