Interviewer: Elvis, what do you like most about Memphis?
Elvis: Everything!

I set out early this morning along a minor road which soon became so little used that moss was growing along the centre. Eventually it became a stony track. Queen Anne's lace, fern and foxgloves, and what the English call eggs and bacon (or is it bacon and eggs?) lined the banks. When did someone last pass this way, I wondered. And then a jogger appeared. The loneliness of the long-distance runner, I thought. I crossed a bridge and passed a house in an absolute idyllic setting, complete with babbling brook. Then I noticed the hole in the roof. You could probably buy this place for 500 euros and spend a million fixing it up.

I walked on and sat on a damp log to rest. Absolute tranquility! I walked on, lost in my thoughts.

Then I was lost in the bush. The road came to an end in a field of wheat. No track. I walked right around the field. No way out. At the end of the neighbouring field I could see a line of trees which might have hidden a road or a track. But how to get there? I was barred by a barrier of barbed wire, brambles, and wild roses. I managed to get through with only a few scratches, and pushed on through the long grass to the trees. On the other side was a track which led a line of electricity poles. Ah, a road. Indeed it was. But which way to turn? Left or right?

This was a classic dilemma for me. A bit like the stock market. If I buy something, it goes down. If I sell something it goes up. I have been responsible for major rallies and crashes. I would be wrong whichever way I turned.

I turned left, hoping for a car or tractor to come along so I could ask directions. None. I walked for a couple of kilometres and came to a village. I asked a woman where I was. Saint-Priest-les-Fougeres, she said. I was further from my destination than when I started.

Of course you're wondering why I didn't retrace my steps until I found where I went wrong. You're right. I should have done, and that's the advice I would give to anybody else. But I find it very hard to go back.

All was not lost. It was still morning and I had only 20 kilometres to walk. I plodded on and eventually reached the town of Thiviers where I am staying at the campsite. I am finally going to consume the can of canard confit that I have been carrying around for two weeks. Tomorrow my pack will be lighter.

At the pub yesterday where I had my customary beer on arriving, I was served by an English woman. Another couple arrived to have a cup of tea. They spoke in an incomprehensible, north-country accent. I wondered whether this little congregation of English speakers would keep the locals away. Only one came in while I was there, and he looked as if he wasn't fussy where he had his beer.

I reflected on the ubiquity of the English in France. The other night at dinner, the conversation turned to the number of foreigners living in France. It seemed that I was headed for a region where many Dutch people lived. "And the English, where are they?" I asked. "Everywhere," was the reply. "And they tend to stick together."

The comment was not meant to be unkind. He went on to say that the English, like the French, find it hard to learn another language. But many, of course, don't want to. I remember our friend Anne in Brittany telling us that her new English neighbours in the village weren't very interested in the free French lessons she was offering them.

Some English make a point of integrating. The couple at one gite where I stayed have sent their kid to school, and he is now, for all intent and purposes, French. But I was horrified to learn that some English still have a Wogs-start-at-Calais attitude. He told me about some people he knew that would go into shops and ask for goods in English and expect the shopkeepers to understand them. No way were they going to make the effort to speak a foreign language!

One of the reforms proposed in the new curriculum for primary schools in England is the compulsory learning of a foreign language. Perhaps this will result in a generation of less insular English.

Today's photo is of Limoges Cathedral. 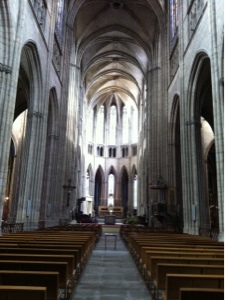 Posted by Carolus Peregrinator at 09:15