And on the seventh day, thou shalt rest

Well, that was my intention, to rest my weary body and blistering foot by spending an extra day in Bourges. Patrick has gone on and will make good progress on his own. His pace is faster than mine and I think he was holding back to keep me company.

Farewell, Patrick. You have been a good companion. Bon chemin!

With a maniacal sense of humour, Patrick is as extroverted as I am introverted, a man of strong opinions and not reluctant to express them. But his views are balanced: for example, he is contemptuous of wishy-washy left-wing government policies that allow minorities to take advantage of tolerant laws, but abhors the right-wing extremist parties that capitalise on the public dissatisfaction that results.

Speaking four or five languages, he is in many ways a typical European, not an academic but an intelligent man with a keen interest in culture and history. He thinks of himself not as Belgian or Flemish, but European, or perhaps "Antwerpian". I refrained from asking if that meant he was a Twerp.

I have included a photo of one of our last meals together. The lady looking after the gite had cooked a meal for us and we ate it outside. She kept detailed statistics of the pilgrims who passed through. I was pleased to notice that I was not the oldest.

I had planned to take today off, but then decided to leave later in the morning and walk a shorter distance. I visited the cathedral again, had a coffee, picked up a few things at the pharmacy, went to the post office, and then set out for the little village of Villeneuve-sur-Chere, 16 clicks away, and 10 clicks short of the next recommended stop. I will make up the distance tomorrow.

For most of the day I walked along the road. The agglomeration of Bourges extended to the village of La-Chapelle-Saint-Ursin where I had lunch.

Side by side were three of the institutions central to the life of the village and supported by the state: l'eglise, la poste, and la mairie.

As I left town, a kind old lady thrust some lollies into my hand. "They'll do you good," she said.

I continued along the road past an industrial zone. Only for the last four kilometres of the day did the path leave the road to enter the woods and take me into Villeneuve.

I am staying at a camp site. Like last night at the youth hostel, I am sleeping on a mattress on a floor in a common room. My companion is a retired maths teacher on a bicycle tour. Fortunately for me, for the restaurant in the village was closed, he had a camp stove and heated up a can of ravioli that Patrick had left me. We ate together and chatted. I learned that there is no Nobel prize for mathematics because Nobel detested mathematicians. His wife was unfaithful with one. Or so the story goes. 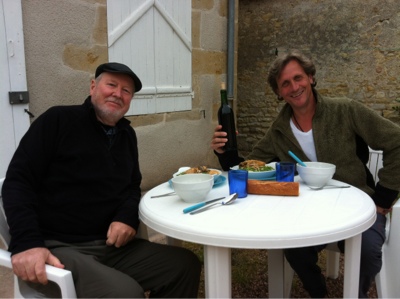 Posted by Carolus Peregrinator at 13:09