We cursed through sludge

As I sat in the bar last night, two of the clients were sitting with their laptops. And I was connected to wifi with my iPhone. I worked out how to get from Saint-Jean-Pied-de-Port to Cannes by train. How times have changed!

I remember that on my first walk, the Coast to Coast, I had to ask a friend who was visiting Britain before me to find out the times and connections to get a train from Manchester Airport to St. Bee's Head. Now I can do it all on line.

Daniel, one of the pilgrims from Holland, carries an iPad instead of the guide book. He has scanned all the pages in, and studies it carefully the night before. Patrick carried one as well. He used it to take photos, of surprisingly good quality. To anyone seeing him from a distance, he must have looked like a water diviner as he walked about the countryside holding this rectangular object in front of him.

The Dutchmen are looking forward to watching a soccer match between Holland and Germany. When I detected a certain hostility in their tone, I shared Patrick's story about the Germans and the bikes. They said it was one of their sayings as well. I was surprised that these sentiments lasted so long after the war. I doubt that Aussie kids still say, as we did, "You can't say 'Barleys' when the Japs are after you." (You used to say 'Barleys' to invoke a truce in a fight. But since you said it when your opponent was about to twist your arm off or punch your head in, it was a usually a plea for mercy or a cry of surrender.)

Rain was threatening again this morning so I put on my rain pants as well as my jacket. (It was a double clammy!)

Every so often you come upon a stretch of the trail that makes up for all of the road walking. Such was the walk this morning along the river. I left Crozant and followed the trail down into the valley. The sound of rushing water grew louder as I descended. Soon I arrived at the Sedelle which was in full spate after all the rain we'd been having. I walked for a couple of kilometres along the bank. Along the path were enamelled paintings by artists of the "Crozant School" who had been inspired by scenes along the river.

I walked by a mill and its leet (see picture below), and launched into,

Down by the old mill stream,
Where I first met you,
With your eyes of blue,
Dressed in gingham too.

O to be sweet sixteen again!

I stopped at La Chapelle-Baloue for a coffee. I was hesitating, but then the sun came out and I saw a nice inviting table on the patio. The cafe, in a large old house, was run by an English woman. She, too, commiserated about the weather. It turned out that she ran a gite as well and offered meals. It looked a nice place. I wished I'd walked on last night and stayed there. Two more Poms arrived. One of them ran after me when I headed off in the wrong direction.

I arrived at Saint-Germain-Beaupre hoping to find a bakery open. No such luck. I sat down on a bench in front of the church and ate a stale crust from yesterday.

Just before Saint-Agnant-de-Versillat I crossed the Sedelle again. There, it was a little stream.

And then, the rain, which had been holding off all day, came down in buckets, or as the Normans say, comme les vaches qui pissent. I trudged along a narrow, muddy path which was now awash. As I slipped in the sludge, I cursed my Keen boots which were now taking in water. So much for their own type of "Gortex"!

I should have worn my leather boots, my Asolos or my Mendels. They would have kept the water out. The Dutch are both wearing Mendels. But, they said, they didn't ask for their bikes back when they bought them.

I arrived in La Souterraine at three-thirty, cold and wet. I am staying at Maison Numero Neuf, which offers a pilgrim's rate. 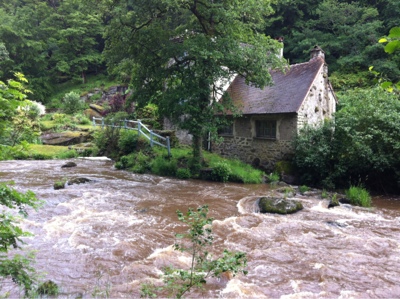 Posted by Carolus Peregrinator at 11:13