Fear no more the heat of the sun

It was 10 degrees when I woke, and the high today was 16. And it rained on and off. So I'm not suffering from heatstroke.

The meal last night at Maison Número Neuf was excellent. I ate dinner with an affluent British couple. We discussed such topics as how the world today would be so different had Al Gore become president.

Boots. I know that some of you are passionately interested in hiking footwear. What am I wearing on my feet and why? In the weeks leading up to my walk, I agonised over what to wear. I wore my Asolos last year. They are expensive, medium-weight leather boots, and I was mighty pleased with them. They made the rough places plain and they kept out the water. But I did develop shin splints on the 25th day, and I wondered whether lighter, softer-soled boots might lessen the pounding which probably caused the problem. So I bought a pair of light-weight Keen Gypsums. The trouble is that the soles are so soft that they may not last the distance.

I took both pairs to Winnipeg, from whence I was to fly to France, and delayed my decision until the very last moment. About to leave, I noticed that one of the soles of the Asolos was fraying at the edges. I had worn them down quite a bit at the heels last year, but this was something new. So I took the Keens.

Strange, though. My old Zamberlans served me well on all those trails in Britain, and a few Rocky Mountain trips, and the Camino and the Chemin du Puy before they fell apart.

So, I'm wearing my Keens and I'm not too happy with them. I've developed blisters, and the membrane isn't keeping out the water. For the first time in my life I had to put newspaper in my boots last night to dry them. In future it's back to leather boots for me. Enough of boots.

Just before Saint-Priest-la-Feuille this morning, I made a detour to see a dolmen, an ancient set of stones, of the same vintage as Stonehenge. Unlike Stonehenge they stood alone without protective barrier or throngs of gaping tourists. (I was fortunate enough to visit Stonehenge with a party of school kids back in the sixties when it was still possible to clamber over the stones.)

I stood in that lonely spot and imagined the Druids sacrificing an animal, burying their dead, or worshipping the sun. Nobody really knows what the stones were for. A huge hemispherical boulder sat atop five standing stones, three of which were supporting it, the other two having sunk a little into the ground. A sixth stone had long since fallen over. The result was that the boulder was supported only on one side of its circular base, and must have been close to its tipping point. (See picture below.)

I thought about how lucky I was to be standing there at all. So many of my ancestors' peers would have been sacrificed, lanced, clubbed,stabbed, hanged, boiled in oil, drawn and quartered, or fallen prey to the Black Death or some other contagion before they could beget progeny.

At eleven o'clock the rain came down. I stood on one leg, then the other, on a dry spot under a tree at the side of the D10, pulling on my rain gear. At Chamborand, the church was open so I took shelter and had lunch.

After that it was an easy walk into Benevent-l'Abbaye. I arrived at two o'clock.

The Holland-Germany soccer match is on tonight. The Hollanders are watching it on their iPad by wifi from a local bar. When the bar closes, they will sit outside and watch. I hope their team wins. 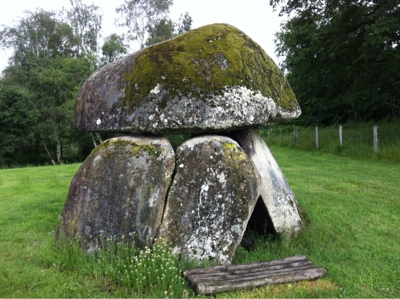 Posted by Carolus Peregrinator at 21:43