And may there be no moaning of the bar

I left the gite at seven-fifteen and took the key back to the Cafe de la Paix. A cat was sitting on the bar sipping milk and a parrot was emitting ear-piercing shrieks. I had a coffee and asked for some croissants. "Il s'en fout," said the woman behind the bar. "Il s'en fout?" I replied. "Non," she said. "Ils sont dans le four." They're in the oven. I often have exchanges like that. Then the croissants arrived and I ate them with my coffee. Half a dozen other customers were bantering with the woman as I left. I had a long way to go.

Tennyson was the rock of Victorian faith and optimism. "Crossing the Bar" would have been heard at funerals as often as "Ulysses" at school graduations. In fact, it isn't quite forgotten yet. I saw it myself in the order of service at a funeral as recently as ten years ago. There is no greater affirmation of faith than that poem:

But it also lends itself to parody.

As I left town I faced a typical dilemma: the path or the highway? I yielded unto temptation. Then I redeemed myself. And then I was tempted again.

I stopped at the little hamlet of Corbleu and sat on a bench on the common. Doves were cooing. It was so peaceful and still I could have stayed there forever. But I had only covered six kilometres. I pressed on.

And then a jarring note. A man was spraying the ditch outside his property with insecticide. Rather than have a weed in his ditch, he was drenching the soil with cancer-causing chemicals. I tried not to breathe in the noxious fumes as I went past.

Then I passed a dog sign even more threatening than those I had seen before, which ranged in intensity from
"Attention au chien" to "Chien mechant" to "Attention chien de guarde". This one showed a fierce dog above the inscription:

I stopped for a coffee at the pleasant little village of GailIeres. I asked the barman how far it was to my destination. Eighteen, he said, by the path. Thirteen, by the highway, but very dangerous. Lots of trucks. After a little hesitation, I took the long but safe route.

For the last two days I have been walking in the Departement of Les Landes (the Moors). The aren't rocky and rugged like the English moors, but they are covered with bracken and heather. And pine trees. The only terrain I have seen in France that reminds me of the Yorkshire moors is around Aubrac on the Chemin du Puy.

It was a very long day. I arrived at Mont-de-Marsan late in the afternoon and found the gite. Daniel had kindly saved a bed for me. Anxious to get to Spain, the Dutch are doing a double step tomorrow. They have been good company and I wish them well. 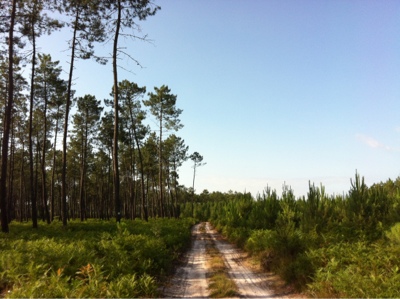 Posted by Carolus Peregrinator at 12:45