It droppeth as the gentle rain from heaven

It was a dark and stormy night, and still raining a gentle drizzle this morning as we left the town of La Charite. We walked along the road for most of the day rather than push through wet, long grass.

I first came upon the line from The Merchant of Venice in my mum's old poetry book, The Harp of Youth, which she had used at Miss Parnell's School for Girls almost a hundred years ago. I still have it and read it. All the great speeches are there.

The quality of mercy is not strained

All the world's a stage,
And all the men and women merely players

To be or not to be, that is the question

Once more unto the breech, dear friends, once more

And as I walked along the road this morning, I found myself marching to the rhythm of other great, rolling iambic lines from The Harp of Youth.

And all day long the noise of battle rolled

When I consider how my life is spent

The world is too much with us, late and soon

Now my mother didn't thrust this anthology upon me; I just picked it up for something to read. But I attribute my love of poetry, or poetry in which the beauty is in the sound of the words, to that book.

As the old order changeth, I rail against many things, but none so much as the folly of an education establishment which no longer believes in exposing children to Shakespeare and the other great works of poetry which may give meaning and pleasure in later life.

The rain was probably a blessing, for our bodies had taken a beating from the sun during the past four days.. Thus, I was now "twice blessed".

We stopped for lunch in a playground shelter in the little village of Couy, and again I thought of my mum who would shout "Cooee" across the back fence to summon her friend Thelma.

In the afternoon, I took a picture of a bicycle wedged into a hedge, with a flower basket mounted on its carrier. (See below.) That's an old bike put to good use, I thought. "Good thing the Germans didn't come along here," said Patrick. It seems that in Belgium during the war the Germans stole many bicycles, and even today, when a Belgian is going to Germany, someone will say, "Bring back your bike!"

Later, a feeble ray of sunlight struggled down between the clouds, so we decided to leave the road and follow the trail into the fields. The woods are behind us now, and we are walking through gently undulating fields of grain - canola, oats, barley, and, of course, dwarf wheat. 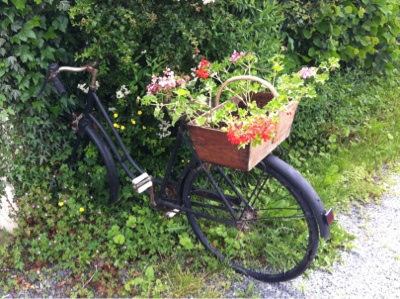 Posted by Carolus Peregrinator at 12:40