I woke up early this morning and was having coffee in the square just after seven, with the sounds of preparation for commerce all around me. Vans were unloading and vendors were setting up shop. Next to me was a fruit stall; opposite, oysters and fish. People were leaving the boulangerie with baguettes under their arm.

On leaving Saint-Leonard I walked across a Roman bridge. Roman legions had crossed here almost two thousand years ago. And these bridges can be found all over Europe. They survive when the modern highway bypasses an old village and the bridge is left intact. In something of an understatement this one was called "Le Vieux Pont".

Then I passed a stretch of houses which were almost literally in the river. (See picture below.) Water ran in front and behind. I bet you could buy one for a song.

After that I ambled along, hoping for a cup of coffee at each village I passed. I was out of luck. I arrived in Limoges about two-thirty, and have found a room in a very cheap hotel. I stayed at a hotel like this in Paris once, and I was disturbed by what sounded like a murder in the hotel which abutted onto the one where I was staying. I called the concierge, but he refused to do anything. So far, all is calm here. 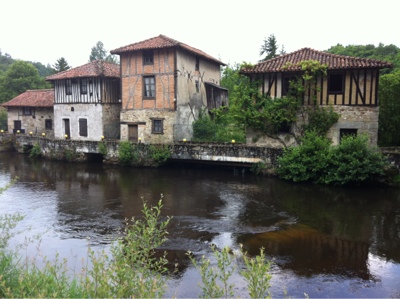 Posted by Carolus Peregrinator at 08:55