Just a singing in the rain,
Getting soaking wet

It started gently enough as I left Argenton, but got steadily heavier during the morning, and continued all day. The distance was only 13 kms. I told myself I had to walk once around Elk and Beaver lakes with a detour to Bear Hill. I arrived at Gargilesse before noon, soaking wet like a drowned rat, and was thankful to find that the gite had been left unlocked.

And what do I sing as I walk? Everything from Beethoven to G&S and beyond, as long as it has a marching rhythm.

Yesterday I found myself singing "Onward Christian Soldiers", and as I listened to the words, I remembered why it isn't on the United Church of Canada's regular roster of hymns. I bet it's right at the bottom of their heritage list where they hope no one will ever find it.

Forward into battle! Slay the infidel!

The other night I dreamt that I met an adherent of the Uniting Church of Australia, the equivalent denomination down under formed by the amalgamation of Presbyterians, Methodists and Congregationalists. I asked her, "Why is your church founded, not on a rock, but a present participle?" (The name sounds so odd to my ear.)

I have eaten lunch (stale bread and very ripe Camembert) and I'm sitting in the gite waiting for the rain to stop. Out the window I can see a pipe protruding at 45 degrees from the wall of a tower, issuing forth water in a steady stream like a man having a pee. He certainly doesn't have a prostate problem. I wish he'd stop.

The walk today was a real hike. For most of the way the route followed a Sentier de Randonnee, marked not with the horizontal red and white stripes of the grande randonnee but with the red and orange bands which indicate a local or petite randonnee. I walked along a discontinued railway line, followed a very wet grassy track along the bank of the Creuse, and then for the first time, climbed up a very rugged trail that wouldn't have been out of place in the Mantario or Goldstream parks. It was slippery, muddy and treacherous. The rain was running down the path in rivulets. And I took heed of Henry Fast's warning not to step on wet roots.

The steady stream has become a trickle so I'm venturing outside.

Gargilesse nestles in a hollow in the hills, overlooked on all sides by trees which climb the steep slopes. It was much beloved by George Sand for its romantic charm. Like Conques or Saint-Guilhem-Le-Desert it is pretty much the way it was in the middle ages. There is an important church, a chateau, and narrow winding streets. Today, because of the weather, it is very quiet. I've seen one or two tourists, two Dutch pilgrims, Daniel and Carl, a cyclist, and a handful of locals. Still, I found a bar and had a beer.

The church is famous for the sculptures on the capitals of the columns, and the 12th century frescos in the crypt. Here is the painting above the altar. 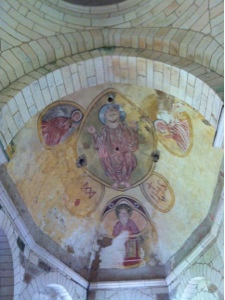 Posted by Carolus Peregrinator at 22:47