I slept well and set out early at a brisk pace. I had applied compedes to the heel of each foot, a huge version with a tail that goes under the heel and wings that wrap around the ankle. So I was walking more briskly than yesterday.

The compede is a peculiarly French, or perhaps European, plaster that one applies to blisters. I've tried them before. More effective than moleskin, they do have a downside. They are somewhat gooey and can turn themselves inside out and leave a gummy residue on your socks. I hope to escape that fate this time. In the meantime, my feet are feeling better.

Speaking of French peculiarities, we discussed at breakfast the anti-radar measures taken by motorists. Didier, the French cyclist, belongs to a League against Violence on the Roads. Understandable, since he's a cyclist, but I wondered if he'd been touched by some personal tragedy as well. He spoke vehemently against the absurdity of the road signs that warn motorists that they are approaching the radar that is supposed to catch them speeding, and the legality of the anti-radar device that many motorists use for the same reason.

My friend Paul in Lyon has one of these. "Slow down, radar ahead," it says. And then, "OK, now you can speed again." Well, not really, but the effect is the same. Why have a law and then permit a device which nullifies the effect of that law?

It's a bit like the water-saving taps that waste more water than a regular tap. They're supposed to save water by turning themselves off, but you press them to turn them on and then you can't turn them off, and they run for five minutes after you've finished. I just washed my hands in a French toilet, and the tap was still running as I left. A French peculiarity!

Mind you, all peoples have their peculiarities. I suppose that ours is our tendency to apologise when the other person is in the wrong. I remember a Canadian in Caen who said "Excuse me" after being almost knocked down by a car.

I walked all day into a strong wind, and I thought of Didier who must have been having a difficult time of it. The wind turbines were making the best of it, though, except for the usual three or four which were standing idle. Together in the wind they make a low growling sound; individually, they sigh in short spasms, rather like a jet taking off far away.

Why do the dogs always bark at me in France? As I walk past, they come tearing out into their yard, longing to leap over their fence and take a piece out me, whereas in Canada, they wag their tails politely and say "Excuse me" when I intrude into their space.

Today, as I walked past a farm, a huge, black brute leapt out of a barn, fangs bared, lunging towards me until it was stopped short in mid-air by its chain. It swung to the left, fell to the ground, and then retreated, ready to begin again. It repeated this manoeuvre several times as I approached the narrow opening between the wall and the end of its chain. I knew, and it knew, that one day the chain would break, and the pilgrim would be a tasty morsel. Fortunately, it wasn't today. I got through safely and walked on into Issodun.

I am now drinking a beer at a bar on a square planted with plain trees that remind me that I am heading south. The church bells are sounding, a deep, resonant ring. I can hear the "ng" in the ring. "Ding" and "dong" are such perfect onomatopoeic words while the "din" and "don" of "Frere Jacques" are poor comparisons. The sun is shining. Didier said that the Loire tends to form the boundary between good weather and bad in France. I hope he's right. 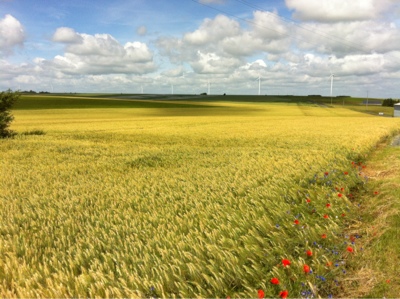 Posted by Carolus Peregrinator at 10:44