The lady doth protest too much, methinks

Sometimes too hot the eye of heaven shines

I crossed the Garonne at eight o'clock this morning. My hostess came with me to me to send me off in the right direction. That's her thumb in the top right corner of the picture below. That's me on the left.

She was a garrulous soul who hadn't accepted the inevitability of change. As she watched the news on television, she would launch into a tirade at every item - against les arabes, les anglais, les jeunes, les sans-emplois, les manifestants, les politiciens, le President - and then wait for me to agree with her. Eh? Then she would mutter and mumble until provoked by the next irritant. But she was kind and generous, did my washing, fed me well, and gave me a comfortable bed.

Gone are the vineyards. I walked across the plain between fields of corn and barley. I passed a sign warning me of low-flying aircraft. What was I supposed to do? Dodge them? I passed a fisherman on the bank of a canal. He had four rods propped up doing the fishing for him while he rested in a deck chair.

I had lunch at Auros in the shade of a tree. It was 33 degrees.

I walked the remaining ten kilometres along the road into Bazas. It was hot, but with a clear sky, it was a bit like Aussie heat, eased a little with a "sea breeze". It's a heat we don't experience in Canada, searing in the sun, and in the shade, enervating in an almost pleasant way, as if the energy is draining out of you and with it the cares of the world.

I rested in the shade, not of an old gum tree, but a grove of poplars. And the breeze blew against me, cooling like a Coolgardie safe. Then it was time to face the sun again.

An air-conditioned coach whizzed by. I imagined the passengers looking out the window and saying, "You silly bugger!" Or in a Peter Sellers French accent, "Vous stupide bougeur!"

At three-fifteen I arrived at la Place de la Cathedrale in Balzas. I sat down and had a beer. 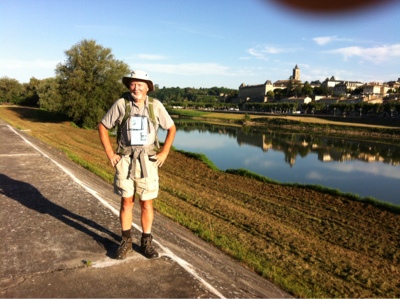 Posted by Carolus Peregrinator at 12:05