Thou hast put me on the rack

Sometimes I have a bounce in my feet, but not today. Yesterday in the woods I felt like jogging, but today, it was a steady plod. Perhaps because I missed out on my morning coffee.

I set out early, just after seven, picked up a couple of croissants for breakfast, and hoped to get a coffee at a little town ten clicks on. But when I arrived there, I found that the town was 1.7 kms off the path. Was it worth trudging an extra three kilometres for a cup of coffee? I decided not, and plodded on.

I walked mainly along minor roads today. The terrain is becoming more hilly, and smaller paddocks are replacing the huge fields of grain. I am seeing cows again. I heard my first cuckoo, and a donkey. I passed several chateaux including one, le Chateau de Mazieres, with a 12th century donjon (tower).

My spirits revived when I reached the little town of Saint-Marcel, just short of Argenton. I had a grand cafe noir at a bar in the main square.

Then I visited the church. It's dedicated to the saint who was tortured by the Romans in 260 AD in the town of Argentomagus, which later became Argenton. I was impressed by le tresor de Saint Marcel, a collection of religious relics (not body parts of the saint, fortunately, but crosses and statues) which had been hidden by the villagers to survive plundering during the Revolution.

If the Romans were clever enough to keep their people happy with bread and circuses, why didn't they realise that making martyrs of the Christians who refused to renounce their faith would be counter-productive? As indeed it was.

Argenton-sur-Creuse is a delightful town. It has been called the Venice of Berry (the Departement) but that's stretching it a bit. The town straddles the river and houses line the banks. No gondolas, but I did see a little rowing boat. It may be in the photo. 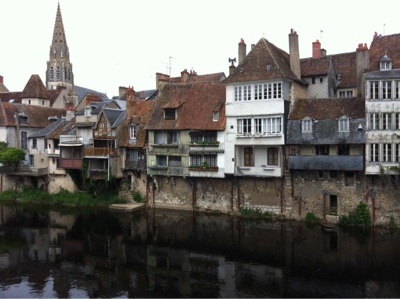 Posted by Carolus Peregrinator at 08:15