I pushed my way against the wind, as occasional showers of rain pattered against my Patagonia jacket. I was spending much of the day going back and forth under the Great Viaduct or over the motorway, or both. Trains whizzed by on the Paris-Orleans main line.

On the way to Chevilly, I witnessed what I thought was the cruellest thing I had ever seen. A movement in the middle of field to the left caught my eye. A large bird, some kind of hawk, was tethered to a pole, and was swooping and soaring as it tried to escape. This brutal treatment of an animal made the force feeding of birds to fatten their liver for pâté seem like the milk of human kindness. I watched it for a while, and then noticed the legs. It's not a bird, it's a bat, I thought. And then I twigged. It was not a living creature at all. It was a kite, and the most effective scarecrow I have ever seen. It had me fooled, and surely I am brighter than a crow? And yet, even the dumbest crow must have wondered after a while why the big fierce bird didn't do anything, but just kept on making threatening gestures.

I sometimes feel a bit of a fraud as I walk on a "pilgrimage", especially when I find myself at an Accueil Pelerin and I'm assumed to be "pratiquant". The other morning, for example, just as I was going out to have breakfast, some young priests arrived and invited me to pray with them and then join them afterwards for their meal. I had to refuse, of course, and my refusal was graciously accepted. It was a kind and Christian offer that would have been gladly accepted by a religious pilgrim.

I told myself that there are many kinds of pilgrims, and that Christian hospitality extends to all kinds. I have always found that to be the case.

In the spirit of the Camino, I thought I would offer you the occasional religious reflection or even my attempt at a Profound Thought.

Am I a Christian? I certainly don't believe in the divinity of Christ or anything that follows, such as the virgin birth or the resurrection. To my mind, these are all later political attributions to a simple and exceptional man. And I certainly don't believe in a benevolent God. That much is obvious. The apologists have tied themselves into knots of logical absurdity trying to explain away the problem of suffering in the world, the injustice of it all! God is punishing the sinners? God works in mysterious ways? What a lot of nonsense!

And yet, I don't like the way the pendulum has swung in the opposite direction. It has become fashionable to knock Christianity.

The great atheist, Richard Dawkins (some would say the great Satan), has called himself a cultural Anglican. That's where I fall as well. In fact, like it or not, that's where most of us lie. Especially if we love art and music and poetry, and feel a part of the great tradition. So I am a cultural Christian.

I love churches, unless they are glass temples. We take them for granted, even if we don't go inside them. Imagine what it would do to the character and beauty of our towns if the churches were pulled down. What would we see in their place? Golden arches? Or worse?

I love the language of Christianity, and I hate to see it dumbed down. I love the King James Bible and the Book of Common Prayer. And I love the Latin mass.

I love the hymns, and had occasion to sing some of them recently when I attended the funeral of a former colleague. John had planned his own service, and against the wishes of his church, had insisted on the congregation's singing the words of the hymns before they were neutered.

I sang with gusto "Praise my soul the King of heaven", or was it "Praise to the Lord the Almighty the King of Creation". I forget which, but both are rich in masculine nouns and pronouns.

And I said the Lord's Prayer, not because I believe it, but because I wanted to do my bit to save it from being rendered into something like:

Our Creator, asexual, bisexual, transsexual, neutered, anything but masculine, Being,
Who art within us and about us, but certainly not up there.
We accord thee a certain amount of respect,
And we may or may not believe in thy divinity.
Give us this day an equitable portion of whole-grained bread, free from chemicals and genetically modified wheat,
But do not expect us to ask for our trespasses to be forgiven, for sin is the artificial construct of a colonial and patriarchal society.
Nor do we ask to be delivered from evil, for there are no absolutes.
May social justice prevail upon this planet,
And may it always be green, even as we enjoy the fruits of its destruction.
Amen.

I have used as few capital letters as possible, because I have heard that they are offensive to some people, but I don't know why and I don't know whom.

It was a fine service, and, as we would have expected, full of great music from Mendelssohn to Gilbert and Sullivan.

John was a fine man, and left a large legacy. I, for one, owe him a lot, for he invited me to join the Manitoba Opera Chorus for the singing of Aida. I was flattered, for I didn't read music. It was only later that I realized that if you sang tenor the conductor didn't ask awkward questions.

I was thinking of you today, John, as I walked across the plains.

At Gidy I received a nasty shock. I had lingered a little this morning, thinking it was only 17 kms to Orleans. I had already walked 15, so I stopped for a coffee and a crust of bread. How far to Orleans?" I asked. " Sixteen, replied the seasoned veteran at the bar. Sixteen?? I looked at my guidebook and saw that the distance to be covered was not 17, but 27, kilometres. I had been misled by the author's assurance that today was an easy day. I looked at his photo on the back cover, and saw the physique of a marathon runner and the physiognomy of a sergeant-major. I trudged on.

Finally, I reached the outskirts of the city of Joan of Arc, the maid of Orleans. I walked into the old town, and found the Hotel du Sauvage, which the girl at the tourist bureau had described as "sympa". And it was, if only because of the largest beam I have ever seen, spanning the top of my room and supporting the rafters above. Tomorrow, I am going to spend the day in Orleans. I hope to regale you with some pictures. 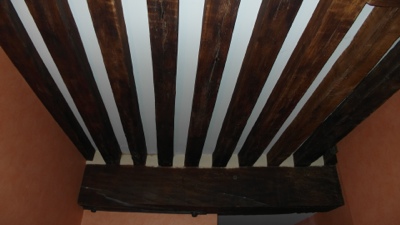 Posted by Carolus Peregrinator at 09:29