A sad, grey day we had of it

If there's one meal that the Brits do well, it's breakfast. I can taste it now, bangers, bacon and eggs, occasionally some black pud, or some haggis if you're in Scotland, tomatoes, even some fried bread, and lots of toast and marmalade. And tea or coffee. I'm not saying it's healthy, but it tastes bloody good, and it sets you up for the day. That's why it's called the full English breakfast.

For all the superiority of French cuisine, their breakfast pales by comparison. It's as if the French have decided to throw in the towel and devote their energies to the important meals later in the day. ("Let the biftecks win the first round. We will win the rest! ") The result is a meal that needs no preparation, just a quick trip to the bakery to buy a baguette. That's why the bakery opens at seven, even on Sundays, and why the stereotypical Frenchman has a baguette under his arm.

The French breakfast, therefore, depends on the quality of its bread. So it's really bad form to serve stale bread for breakfast. Sometimes it's unavoidable, if breakfast is served before the bakery opens, for example. But then the bread is toasted. Which is the only way to eat stale bread, isn't it?

I was really disappointed in the breakfast at the Foyer. And it's no excuse to say that this was a religious establishment. You can bet those loaves in the Bible were fresh!

As I walked by the church on the way out, I noticed a sign saying, "No begging". What would Jesus have said? Or Pope Francis?

On the path I met not a solitary soul.

I crossed the Loire, walked along the stone bed of the old tow path, and then cut across the broad plain which bordered the river, making my way between fields of barley and wheat. The sky darkened, and even the birds were subdued under the threat of rain. I passed through the hamlet of Aumone, and then stopped for a coffee in the village of Cande-sur-Beuvron. There it began, lightly at first as I raced along the final six kilometres, but then more heavily, and by the time I reached Chaumont it had become a downpour.

I was drenched, and left a puddle on the floor of the Office de Tourisme, where I popped in to find somewhere to stay. Tourists had taken all the bed and breakfasts, and I was lucky to get the second last room of the hotel.

The rain has continued non-stop since I arrived, so I've decided to give the chateau a miss.

I decided to wear leather this year. Last year I wore Keens Gypsums, and got blisters and wet feet. So I bought a new pair of Zamberlans, and today my feet were dry. And they were solid on the stony path. And so far, no blisters. 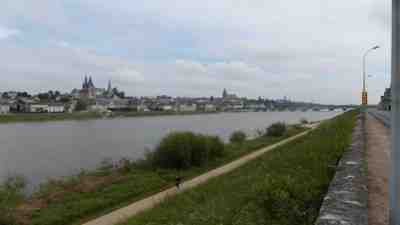 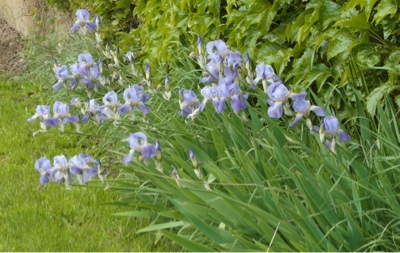 Posted by Carolus Peregrinator at 00:18