What a piece of work is a man!
We left the gite early and walked the couple of kilometres into town for croissants and coffee. Then we set out into a very cold wind, under blue skies for perhaps the very first time.
We walked for a while on minor roads through fields of barley, wheat and canola. I am noticing more and more poppies. They pop up in the wheat fields, and they thrive along the verge. In fact, they grow anywhere they like, even on the top of stone walls.
Then we headed off along a farm track into the woods. How dark and gloomy and ominous they were! No wonder they have been the setting for so many tales of magic and mystery!
Today, I witnessed Man in various manifestations.
First, in his prehistoric role.  At the edge of the wood, overlooking a field, a menhir stood alone, le dolmen de la pierre percee. What did he represent? A tomb? A deity?
And the hole? An eye, or simply natural erosion?
When I come upon these standing stones, which are seen all over Europe, I am always struck by the contrast between their present and past existence. Today, they stand alone in silence, but for the wind in the trees. In the past, they would have been at the centre of some strange ceremony with chants and cries and shouts as perhaps some deity was being worshipped or some human, sacrificed.
What were they like, these ancestors of ours?
Nothing beside remains.
For much of the day, we walked close to the railway line where TGVs whizzed by every ten minutes or so. To get to the village of Maille, we passed under the line at the station where we saw a grim reminder of man's inhumanity to man. Fastened there, was a plaque commemorating the SNCF staff and their families who had lost their lives in the Massacre of Maille. In the Second World War, 124 of the 500 inhabitants of the village had been murdered by the Germans in reprisal for the actions of the Resistance.
At our next stop we came upon the little Romanesque church of la Celle-Saint-Avant, built by monks on the site of the hermitage of St. Avant, who gave his name to the village. This was a place of refuge for the poor who passed by.
A little further on we saw an unfortunate example of utilitarianism. A little Romanesque chapel, which once must have  been part of a grand estate, now belonged to a farm and was being used for storing farm equipment. And breeding rabbits!
It is common enough to see deconsecrated churches being put to practical use. All around us we see them functioning today as private houses, theatres, antique shops, and even bars and restaurants. In Dublin, an 18th century church where Handel played the organ is now a fashionable place to eat and drink. It is better to use the building for a secular purpose than have it replaced by a parking lot or fast food joint.
But this was a unique historic building, almost 1,000 years old! To be fair, it was in good shape, and perhaps the farmer and his forbears were well aware of their responsibility to take are of it. Every feudal estate would have had its chapel, and many of them would have been pillaged by the paysans for their stones.
Just outside the village of Celle-Saint-Avant, we stopped to eat our baguette and cheese at a picnic table overlooking a lake. I had thought that I was too late for daffodils, but there they were, big King Alfreds actually growing in the lake, perhaps held back in their growth by the cold water. Or were they yellow iris?
We finally reached Dange, having walked many more kilometres than we were supposed to. We had made a detour to avoid construction, but had to cross a chantier Interdit au public anyway. This time the mud was fairly dry.
Tonight we are in another municipal gite, but this one lacks the charm of last night's. It is big and cold, and we have every electric heater we can find going full blast to try and warm the place up. 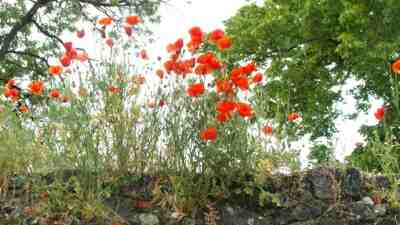 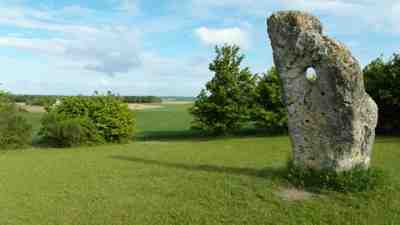 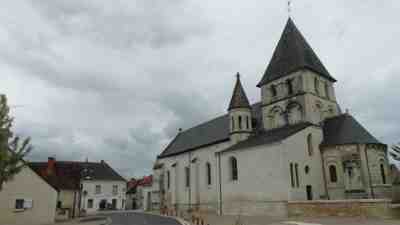 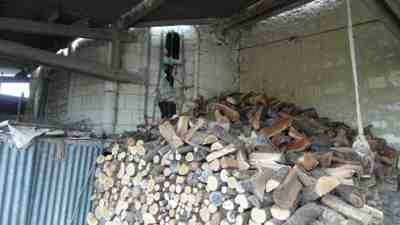 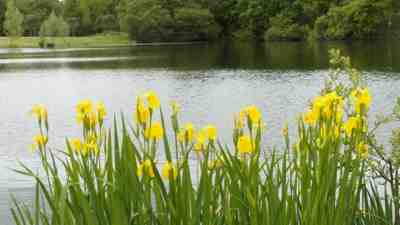 Posted by Carolus Peregrinator at 06:22