Valderi, Valdera...
I had breakfast at the hotel where I had eaten last night. The landlord was more pleasant than his wife. She, perhaps, had been a little resentful because I had stayed at the gite and not her hotel.
I am full of admiration for the mairies of these little communes which provide a gite for the pilgrims. They certainly don't make any money; in fact, they must barely cover their expenses, considering the cost of heating the old buildings.
Nor do I see how they can claim that they are doing a service to their community. One or two pilgrims a day might each spend up to 20€ perhaps at the shops and restaurants. Pilgrims are not big spenders.
There remains only one reason why the mairies do this. They must feel that they have a responsibility to look after the pilgrims who pass through their towns, not so very different from the religious responsibility of the church in earlier times. They are very careful to establish that you are a bona fide pilgrim: they stamp your creanciale and take a photocopy of your passport. To me, it is another example of the curious ambivalence of secular France towards the Church: it is not their faith, but it is their heritage.
I took a chance on the weather, overcast again, and wore my shorts, leaving off the rain pants. Later, I was to regret this.
Chauvinist that I am, I do not think that French has too many linguistic advantages over the language of Shakespeare. We have twice as many words, and most of them can twist themselves into various Protean shades of meaning. But once in a while, the French beat us at our own game. As I made my way out of town, I was told by my guide book to "obliquer a gauche". What a useful example of a verb formed from an adjective!
Much more common, and used by everybody several times a day, is the verb "longer", to go along. It is so useful, and a verb we could do with in English. On longe la rivière. In English, we can long for something, or long to do something, but we can't long a river. We have to go along it.
My guidebook tells me, on a long section where there is nothing much to see, to "laisser vagabonder mes pensees". And that is exactly what I do as I walk: I let my thoughts vagabond. I was going to coin that word myself, but my dictionary tells me it already exists in English.
My thoughts were vagabonding as I walked through the bocage, a region, now rather rare in France, characterized by small fields enclosed by raised hedges. Unfortunately, large scale agriculture prefers very large fields without any barriers to their machines. But in this part of the country at least, man is in harmony with nature. The hedges prevent erosion, the ditches provide natural drainage, and both provide homes for birds and animals.
I remember reading somewhere in classical literature, that the golden age was a time when men lived in their own villages in harmony with nature. In successive ages, they began digging minerals from the earth and leaving their homes to invade other lands. As I walk by these small fields and see old stone houses heated by the cords of wood stacked up outside, I am reminded of that golden age.
In one of the hedges enclosing a large estate was an old gate in front of a long lane leading up to a chateau.
Then I came upon a farmer pottering about in his field. He pointed to the sky, indicating that it was going to rain. I hoped he was wrong, but he wasn't. On a wet trail, without any shelter, I had to do my "rain dance". It is not possible to put on my rain pants over my boots, and therein lies the problem. I have to take my right foot out of my boot, and put it into my right pants leg, and then back into my boot, all the while balancing on my left foot. Then I repeat the process with the other foot. If I lose my balance, I have to either put my sock down into the wet or topple sideways into the mud.
I have seen the source of the "scarecrow" explosions. A device, rather like a cannon, is fuelled by propane. I'm still not sure whether it fires at regular intervals or at random.
At the village of Saint-Sauvant. I saw a fine old building put to good use. Nicknamed the chateau, it was built in the early 20th century by a self-taught local boy who made good. The commune was now using it to house their library.
I arrived at two o'clock at Chenay. There is nothing here, not even the gite that I had expected. And the hotel was closed. I was directed to a chambre d'hôtes on the Place de la Mairie. Here, I have eaten well, and I have comfortably settled in to a large room under the roof. 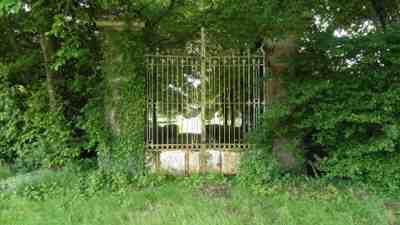 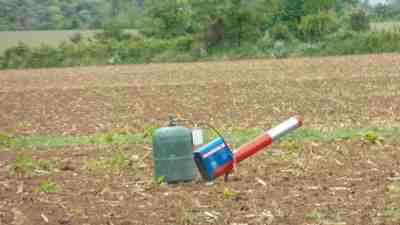 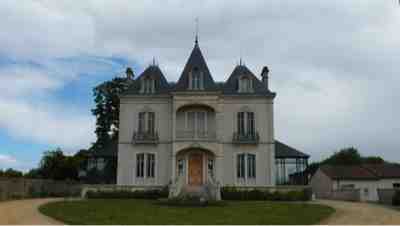 Posted by Carolus Peregrinator at 08:36