Who is the nasty, cross lady, Mama?
Hush, child, she's a witch.
I woke up this morning to blue skies, but by the time I left the hotel it had clouded over again. As I walked through the village of Chaumont I caught a glimpse of the castle I had missed the day before.
After walking along the highway for several kilometres, I took a little road up onto the plateau, where I saw my first vineyards, extending on both sides almost as far as the eye could see. Perhaps these were the grapes that had produced the vin de pay I had enjoyed last night. I arrived at the little village of Rilly-sur-Loire and rejoined the main road.
Half an hour later I walked into Mosnes, one of those linear French villages that stretch out forever. Eager for my first coffee of the day, I was directed to to a bar which was supposed to open at ten o'clock. I arrived on the dot. It was closed. At five past, I tapped on the door. A woman appeared. "No need to knock on the door," she said, clearly annoyed. "J'arrive." She plonked my coffee on the table, and when I paid, brought me my change without a word. No merci or au revoir or bonne marche. Not a word.
I have written before of the effect that "those little, nameless, unremembered acts of kindness" can have on the recipient. The reverse is true as well. This was the first case of rudeness I had encountered in France. It rankled. I hurried off. I was in no mood to tarry.
Perhaps they were all as miserable as her in that place, without a chateau to bring fame to their little village, halfway between the tourist towns of Chaumont and Amboise.
Bugger the guide, I said. I'm heading straight down the main road. By now the traffic was increasing, and I had to move out of the way of the oncoming traffic on to the verge. Unfortunately, nettles had already claimed it as their own.
But I soon cheered up. Some cyclists rode by and greeted me as a fellow traveller. They, too, were on their way to Saint-Jacques. Then a couple of 2CVs honked their horns in encouragement. That happens a lot. I walked on.
Always the Loire to my right, and to my left, great limestone cliffs with caves hollowed out of the rock. This, I assume, was the origin of the word for the cave, the wine cellar in the basement of every French home. Originally, wine had been stored quite literally in a cave, and the word had stuck. Now some of these caves were open and elaborately furnished inside, with signs in front which said, "Visite. Degustation. Vente." I was sorely tempted, but I wanted to reach Amboise before the rain.
I took a little detour off the main road into the village of Chargé. Villages sprang up for a reason, on a river for the mill or on a hill for fortification, or perhaps at the crossroads for the trade. The little village of  Chargé clearly exists because of the wine. Numerous caves extended back into the cliff to store the wine from the grapes that grew on the plateau above. Perhaps the wine had then been shipped downstream to the coast. Perhaps the very name derives from its role as a loading place.
Or perhaps the wine had been shipped out by rail. The main railway line which serves the towns along the Loire runs along the north side of the river. But there must have been a line on the south side as well. Abandoned, the little station of Chargé stands alone.
I then continued down the highway into Amboise, a town that grew up at the foot of its great castle. I am installed at the Hotel le Francais in a room on the second floor "with a nice view of the Loire," he said. Indeed there is, in the distance, beyond the car park and the tourist buses. Then I ate a salad at one of a long line of restaurants overlooked by the massive wall of the castle.
In the afternoon I visited the chateau. Although it later became a royal palace, the site had long been an important defensive position with its commanding view of the Loire. In the garden is an impressive Lebanon cedar, planted in 1840. Leonardo is buried in the little chapel set back and between the tree and the palace. It's a very impressive royal chateau, but if I had to choose between the two, I would visit Blois.
Everyone here is talking about the weather, how bad it is, how there hasn't been a spring this year, how it isn't "normal". Yesterday, a man stopped me on the bridge, and said, "Where is the sun, eh?
Actually, it hasn't been that bad for walking, and I've only had one bout of serious rain. But it dampens the spirit. 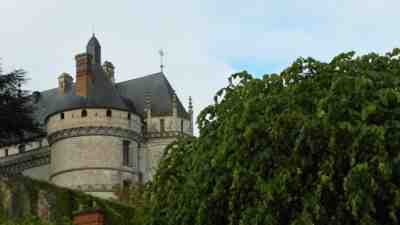 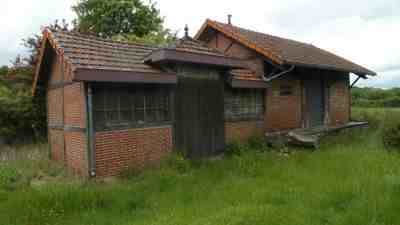 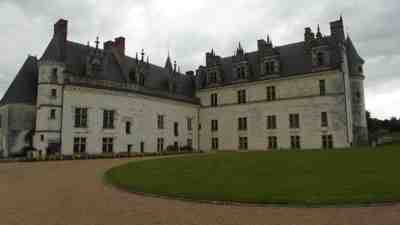 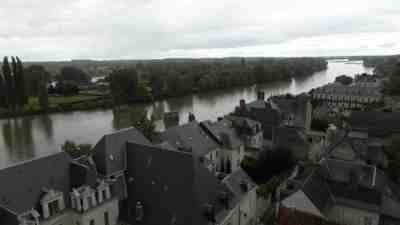 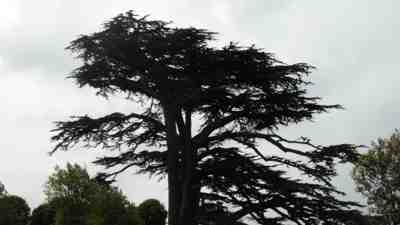 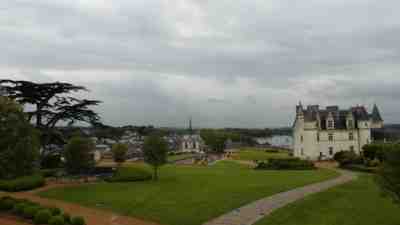 Posted by Carolus Peregrinator at 06:05