Dedicated in 1414, l'Eglise Saint-Jacques-de-la-Boucherie stood for many centuries on the bank of the Seine, not far from la Cathedrale de Notre Dame. Pilgrims from all over Europe would assemble at the church before continuing their journey to Santiago. The church was reputed to host a finger, a tooth and a rib of the saint himself, but all that remains today is the tower.

It was here that I began my walk under an overcast sky with intermittent rain -- gloomy weather after the sunshine we have been enjoying at home.

It was a glorious morning as we drove out to the airport in Victoria: a little hazy, cool, but with a promise of summer warmth later on, and yet another fine day in a long string of them. What a paradise we live in! Did I really hear someone complain about the heat?

Surprisingly, the flight from Victoria to Calgary was in a propeller plane, a blessing as it turned out, as the drone of the propeller drowned out the drone of the passenger behind, who began his nonstop monologue the moment he sat down. A double blessing, because we flew lower than usual, and enjoyed a spectacular view of the mountains. But the sky turned hazy as we crossed into Alberta, probably from the smog of the tar sands.

Everybody has his own list of the passengers from hell that he is sometimes unfortunate enough to be seated beside or near. Mine includes the aforementioned drone, who is especially annoying when you've been looking forward to a quiet meditation or read. You can sometimes escape by feigning sleep. Then there's the person who falls asleep beside you then lolls over into your space. I had one of those on the fight from Montreal to Paris. I was also unlucky enough to sit in front of a kicker. Not only a kicker, but a wrencher, who would haul himself up by grabbing the top of my seat.

And then there's the crying baby. My ailing ears can no longer distinguish words clearly, and almost missed the last call for my flight from Victoria to Calgary, but they are still susceptible to the piercing shriek of a baby in distress. Not much you can do about that either, except empathize and remember when you were the unfortunate parent, and determine to bring earplugs next time.

As a child I would travel by train from York to Perth, and the clickety clack of the wheels on the rails would transform itself into songs in my head. They were probably the early cowboy songs of Slim Dusty, who later became famous for "The Pub with No Beer". But on the flight across Canada, the dull grey sound of the aeroplane in flight gave rise to melodies from the previous night's concert, particularly the haunting themes of Steve Dobrogosz. I have often noticed how the broad rush of air and motor provides a harmony to whatever song comes out of the ether.

I have written before of the days when the booze flowed freely on Flight 870 from Montreal to Paris. Last year I managed to cajole a reluctant brandy out of the flight attendant. Not this year, I'm afraid. "Those days are gone," she said. There was not even a second glass of red, so I arrived in Paris in pretty good shape.

It's strange how you seem to have more octogenarian friends as you get older. In Paris, at the foot of the Tour de Saint-Jacques, where my walk began, I met my old Aussie mate, George, and his charming wife, Josephine.

George is a wiry bugger, still much fitter than I am. His eighty years hang lightly upon him. After walking the Camino with me more than ten years ago, he went back to Oz to ride his bike across New South Wales. Now he limits himself to twenty-mile circuits around the Swan Estuary. George is searching for the meaning of life, and when he finds it, he's going to tell me. I am his Telemachus.

Josephine complements him. He is down to earth and yet whimsical; she is kind, ironic and intellectual, and would have been a fitting narrator for a Jane Austen novel. Or perhaps one by George Eliot.

We enjoyed a coffee in a congenial cafe beside the tower and then I was off.

Meeting them was the highlight of the day. After that, and a brief pause on the bridge for a photo of the always-beautiful Seine with the Eiffel Tower in the distance, I strode rapidly towards the outskirts of Paris, along the Boulevards Saint-Jacques, General Leclerc and Aristide Briand, crossing the Boulevarde Periferique at the Porte d'Orleans. I sought refuge from the rain in a Baptist Church where I was received most hospitably.

The last time I was in a Baptist Church, 30 years ago, I was horrified to be hugged. What is Christianity coming to, I thought.

Later in the afternoon I saw the familiar red and white stripes in front of a wisteria vine, but there was no grande randonne to be seen. A promise of things to come, perhaps.

Tonight, in Massy, as I look out my window, I see, not Roman ruins, a cathedral, or green fields, but an ugly square with tall narrow apartment buildings on one side and long, low, flat-roofed bars and restaurants on the other. Tomorrow, I will not tarry, but hasten to get out of the city. 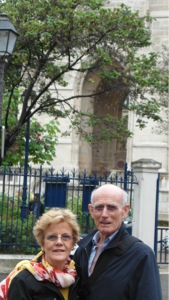 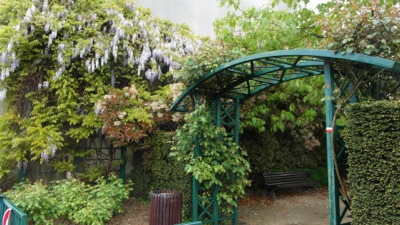 Posted by Carolus Peregrinator at 09:48