It is a beauteous morning calm and free

I like these cheap hotels, but some people wouldn't. They are very basic, and there's always something wrong in the room, such as a nasty stain on the floor, a lamp that doesn't work, a toilet flusher without a nob, a shower hose without a wall fixture, or a sink without a plug. So I have become quite adept at showering with one hand or using a sock to keep the water in the basin when I wash my clothes. But the bed is comfortable, the room is quiet, and I usually have a good night's sleep.

After a generous breakfast with coffee made by hand, I wended my way down to the Loire.

Women walked by with their dogs. A workman cut the nettles along the verge. A man was performing his tai chi, or praying to the Great Spirit of the Loire. I fell into a reverie myself, and imagined this path in the past, kings travelling from palace to palace, nobles riding by on horseback or, as Dickens would have it, in a coach, running over a hapless child and dispensing a few coins in recompense.

I have been rereading Dickens and finding it a little disappointing. Those insipid female characters like Dora and Florence, so silly and weak, even for Victorian times. Give me Dorothea or Emma or Elizabeth instead. Even the heroines of Mrs. Gaskell, an admirer of Dickens, had more backbone.

I walked under a massive viaduct which filed in from my right, but then stopped short. Another bridge to nowhere? The folly of a rich nobleman who had constructed an elevated walkway for his morning stroll?

My speculations were put to an end by the next person that I met. The lady explained that the viaduct had in fact carried a railway line across the Loire. It had been bombed during the war. Indeed, I looked back and saw the lonely pillars standing in the river.

She too had been to Canada, and had travelled on the Rocky Mountaineer, and visited Victoria and the Butchart Gardens. Very British, Victoria, she said, not the first person to make that comment. We agreed that it was truly a glorious morning, and I expressed my hope that perhaps it marked a change in the weather. She made that characteristic French gesture with her hand that expressed her doubt. She was right, as it turned out.

Until now, we have been well regarded by Europeans, but we should remember that they are well aware of our tar sands, which have probably replaced our unfortunate slaughter of the seals as an object of their disgust. While they try to control their emissions, we in North America pollute the air they breathe and mess up their climate.

A majestic troop of white swans swim out of a backwater towards a string of islands. Pink and white blossoms stand out against the green of the woods. A cuckoo sings incessantly.

Why is the call of the cuckoo such music to my ear? Why is the sight of the swans so pleasing to my eye? Why does this vista of sun and sky and woods and river fill me with such a feeling of well being? Surely we are meant to live in harmony with nature!

When I see the dogs playing and the lambs gambolling and the horses nestling together, all taking such pleasure in one another's company, I wonder, can all this be the result of chance?

Evolution does not explain to me the beauty of Nature or the joy of Living!

It was a wonderful walk on a glorious morning.

As I arrived in Blois, I noticed high on a hill a quite attractive modern church which made me think that not all contemporary ecclesiastical buildings have to be like those utilitarian glass temples which surround our cities in Canada.

The church turned out to be my destination, the Foyer de Notre Dame de la Trinite. At the Acceuil I was attended to by a young woman with such a disturbingly low neckline that I had to lift up my eyes unto the heavens. Quite a sight in a Catholic retreat! And hardly fair to the celibates. Or was this the modernization of the church?

I walked down the hill into the centre of town. On the way I ate the plat de jour on the terrace of Le Denis Papin. It was a pastille de canard, a superb dish, a kind of pie made of lentils and minced duck. I stopped at a magnificent building to admire some ornate carving. "It's a private home," said a man." We have such beauty everywhere in Blois." Indeed they do!

Then I visited le Chateau de Blois, that amazing quadrangular palace with its wings constructed in different architectural styles, the seasonal home of Francois I and Henri II. Afterwards, I sat and drank a beer at a bar overlooking the chateau. And then the wind almost whipped the umbrellas off their stands and it started to rain. I took my beer inside. 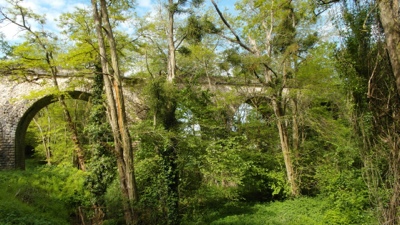 Posted by Carolus Peregrinator at 00:05