All things bright and beautiful,
All creatures great and small...
I set out into drizzling rain, glad of my zambs as I splashed through the puddles.
My pack was heavier than usual this morning, perhaps because of the increasing number of tablets of hotel soap I am accumulating in preparation for my staying in gites later on. I always seem to leave my soap in the shower stall, so I wanted plenty of spares.
As I left town, I noticed that it was market day. Merchants were buzzing around with umbrellas, setting up stalls, darting back and forth, unloading their wares, and even at half past eight, early-bird shoppers were out and about, looking for the worm. There must have been at least two hundred stalls, stretching out in a long line between the levee and the Loire, selling everything you could imagine: clothes, clocks, tables and chairs, gold and silver, books and paintings, linen, china, carpets, not to mention fresh fruit and vegetables.
It's a wonderful tradition which seems to have survived the advent of supermarkets. Every town has its market, on a different day of the week to allow the merchants to move from one place to the next.
I left the levee to walk along the main road, and then along a bicycle path with signs indicating the way to Tours.
Wood smoke drifted from a chimney top as I arrived at the village of Lussault-sur-Loire. It was warmer inside than out. I resisted the temptation to have a coffee at a bar. I had a long way to go.
You can't win when you're walking in this weather. If you wear just a tee shirt under the rain jacket, you get cold. If you wear something over the tee shirt, you get hot, and then you sweat, and then you get cold.
I noticed some elongated islands in the middle of the river, running parallel with the current, in various stages of becoming solid land mass. Some were mere sand banks, covered in birds, with many more, squawking overhead. On a few, vegetation had already taken root, and they supported a few young trees. Others were now well-treed like the mainland. Nature reclaims its own.
Now it was time for a coffee. I walked along the footpath into Montlouis-sur-Loire and almost stepped on a very large snail.
Hie thee hence, thou lone, lorn creetur, or thinks will go contrairy with thee.
I dodged a couple of dog turds. A friend in France would call this a crottetoir. The English equivalent would be a "shitpath". Mind you, it used to be a lot worse. Thirty years ago you would barely find a bare space on the pavement to put your feet.
The  French have improved in other ways as well. Back then, if you ventured onto a crosswalk, you took your life in your hands. Now, the motorists sometimes stop for you. This morning, as I approached a crossing on the main road, a man came slowly to a stop, gave me a broad smile, and waved me across, much to the surprise and the annoyance of the traffic behind. He had probably walked the Camino.
I stopped for a coffee. This was a friendly bar. Everyone said Bonjour as I entered, and Bonne Journee as I left.
I pressed on. Finally I could see the spires of the cathedral de Tours in the distance. When I arrived, everything was closed. It was Pentecost. I found a hotel, and did my washing, even though I've decided not to stop the two days it would normally take it to dry in this weather. I have a hair dryer which is going to work overtime.
I visited the cathedral, and there, occurred one of those magical moments which happen from time to time on the Camino. An orchestra was playing a very familiar introduction, and I felt I just had to come in with "Qui tollis peccata mundi". I think it was the Mozart Requiem, but it may have been the Faure. No choir, but a very good youth orchestra was practising for something.
The cathedral is stunning, very large, Gothic, with an amazing array of stained glass on either side of the choir.
I went back to my hotel, and went to work with the hair dryer.
Back in Perth in winter in the old days, when I met my mum's friend Thelma out walking, she would say, "Hello there, I've just come outside to get warm." There was no central heating in Perth.
I went outside to get warm, and found a restaurant.
It's interesting how the servers  always assume that I will have my beef well done. Which I do, of course. Not that it ever is. Blood is always oozing from a well cooked steak in France. Except tonight.
I have learned that you get what you pay for when it comes to eating here. If you walk along the line of restaurants looking for what seems to be the best deal, you will end up with steak frites, with the steak as tough as old boots, and the chips better than the steak. That is the tourist menu. But if you pay a little more, say five dollars, you can eat superbly well. That's what the locals do. And tonight, so did I. It was a superb meal at the Restaurant de la Ferme on the rue Colbert. And if I had to order a demi-bouteille because my usual quart de rouge wasn't available, so be it.
So my advice to you is this: Never have breakfast at your hotel. Buy the bread and croissants at a bakery. Take them to a bar and eat them with your coffee. Put the five dollars you will save towards a superb evening meal.
The French can teach us a lot about eating and drinking. And living!
What can they teach us about living? Carpe diem. Eat, drink and be merry, for tomorrow we shall die. 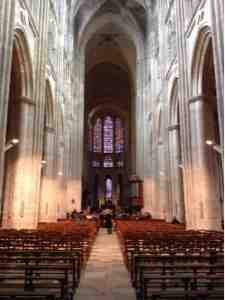 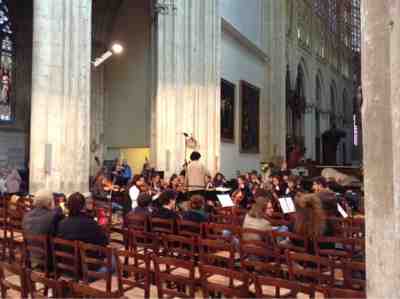 Posted by Carolus Peregrinator at 08:03