A cold coming we had of it

Arpajon is famous for its halle, a wooden, barn-like structure, built to house a market. The halle de Arpajon was erected in 1470. At half past seven this morning, when I went looking for a coffee, the merchants were already setting up for the Friday market.

I drank my coffee and left. It took some time to reach the outskirts of town, and after some fumblings and bumblings (the tumblings came later) in the village of Egly, I reached the wide open countryside. I felt the full force of the wind that was tearing to shreds the rags of the four scarecrows guarding the empty field.

Then, at Boissy-sous-Saint-Yon I visited the Eglise Saint-Thomas a Becket, listed on the inventory of historic monuments for its famous alabaster bas-relief of that "cursed priest" dispatched by ambitious knights to please their king.

At the next village I took advantage of the shelter in l'Eglise Saint-Sulpice to eat my demi-baguette. This massive church, with its flying buttresses and gargoyles reaching out with open mouths like thirsty sinners in the flames of Hell, is another example of a huge church in a small village, a sign of past piety or wealth. The portail is very fine with only the head of the Virgin lopped off by zealous Protestants.

Of course, it was really ignorance and guilt and fear as much as piety that motivated the alabaster sculpture or the ornate church. There was no connection between Thomas a Becket and Boissy-sous-Saint-Yon, and there was no need for such a big church at the little village of Saint-Sulpice-de-Favieres, but if the the villagers were human like the rest of us, and the priests told them that they were going to roast in the flames of hell if they didn't do their bit for the glory of God, and they weren't able to reason otherwise, then what else could they do?

Today the Taliban lop off the heads of Buddhist statues and other ignorant people seek salvation in their own way, at the expense of others.

In front of the door I met a rambler, who suggested that I take the road into Etampes and avoid the exposure to the wind as I walked across the plain. Oh that I had! I wouldn't have taken a wrong turn later on.

But the wind had died down as I walked across the open fields, and I made good progress. Later, I took a little tumble as I scrambled down a rocky path in the forest. Nothing serious.

It was at Brieres les Scelles that I somehow missed a turning and walked unnecessary kilometres. I followed the advice of a friendly barman rather than retrace my steps. He spoke in broken English, either for his own pleasure or to avoid the pain of my French. I always wonder at the motivation when that happens. Is my French worse than their English?

Eventually, I arrived at the outskirts of Etampes and walked for a couple of kilometres along a very fine bike path. But I didn't have to dodge any bikes. There weren't any. Come to think of it, I haven't seen any bikes on the many paths I have seen since leaving Paris.

I am staying tonight at the Presbytery, accommodation more humble than last night's hotel, but a lot cheaper. In any case, a dorm when one is alone is like a private room. But it's cold. And there's a notice warning of the high cost of gas. But I've turned the heat up anyway. Why can't the Church harness the flames of hell to heat their presbyteries? 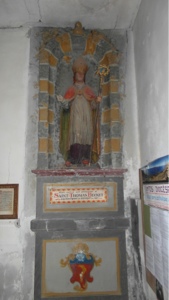 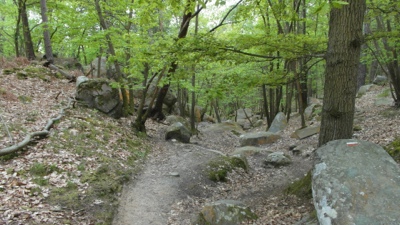 Posted by Carolus Peregrinator at 11:50