Sleep that knits up the ravelled sleeve of care

At breakfast I sat opposite a grim-faced French family. He had a dark look. She had a dark look. Each of the boys had a dark look; in fact one of them had a very dark look which got even darker after a clip on the ears for making a mess at the table. He was incessantly tapping his fingers. I was glad that he wasn't in my class this morning. He would have brought a lot of anger to school with him.

Then the parents went outside to have a smoke and the kids ran around in the car park.

I began sluggishly. After my customary beer on arrival yesterday afternoon, I fell asleep at the bar, and that must have upset my efforts to avoid jet lag, for I awoke at half past three in the morning and couldn't get back to sleep. Usually, on a sleepless night, I fall into deep slumber just before the alarm bell rings, but last night I didn't even enjoy that brief moment of repose before getting up. So this morning, I did not leave carelessly.

Then I enjoyed my first glimpse of the countryside. A bunny scampered away as I approached. I noticed a horse and cow sleeping side by side in the sun and the birds were singing softly.

I have left behind the continuous stretch of housing and commerce that extends out from the centre of Paris. The capital, of course, was always encircled by villages, and as the population expanded they were eventually engulfed by modern development. Farther out, where I walked today, a little of the surrounding countryside, but not much, has survived. Tomorrow I hope to be en pleine campagne.

As the country opens out, the people seem to become more open as well. Not that Parisians are rude. That's a myth. But they may not bother with you unless you approach them first. They are townsfolk:

They have no time to waste.

Now people are starting to recognize that I am walking the Compostelle and they point the way. Or they stop and talk.

I met one fellow with a friendly dog, and we chatted for a while. In his youth, he had hitch-hiked around Britain, and the locals had been very kind to him there and showed him the way. That's why he was showing me the places to visit, he said. I suspect he had told this story before. Eventually, I had to make an excuse to get away, as he kept flipping through my guide and finding something else I mustn't miss.

That was the only friendly dog I encountered. The rest would bark and run up against their wall to have a piece of me. And then I passed an industrial site "securise par les maitres chiens". It sounded like a master race of dogs that none of the others would dare to mess with.

In the afternoon, I passed beneath le tour de Montlhery, vestige of a medieval chateau, and used in more recent times in experiments to determine the speed of both light and sound. I was not travelling at the speed of either, and I hadn't booked any accommodation, so I didn't make a detour to visit the tower but pressed on to Arpajon.

I walked 26 kms today, according to my GPS watch, two more than I should have done. The guide sometimes leaves out details that can be very important.

A word about gadgets. This is a little embarrassing. On my first long distance walk, apart from a camera, I didn't carry a single gadget. Today, I carry an iPhone to receive data from the internet, a French pay-as-you-go to book ahead and receive telephone calls, an iPad mini to write and post to this blog, and a GPS watch to track my daily progress. And as accessories to all of these, six cords, two chargers, and two adapters. A pound of flex! The joys of the simple life. 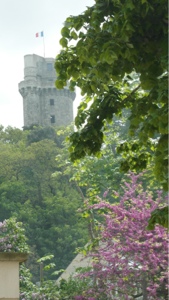 Posted by Carolus Peregrinator at 11:01