What's in a name, she says, and then she sighs
As we left the village, the bell in the church tower struck eight. It was overcast, and ominous, so I put on all my rain gear. That ensured that we stayed dry.
The audible scarecrows were in operation. One made me jump, as if someone had fired a shotgun just a few feet away. It sounded again about five minutes later, but by then I was well out of range. I wondered if they were timed to fire at regular intervals, or at random, lest the birds get to know the timing and think that they had four and a half minutes to scavenge.
Half way to Chatellerault we made a little detour into the village of Ingrandes for a pause cafe. It was there that we realized that we had forgotten to leave the key of the gite in the letter box at the mairie. Fortunately  the person who had given us the key lived in Ingrandes, so we were able to leave it at their mairie to be picked up. After that little time consumer, it was full speed ahead to our destination, a campsite on the other side of town.
I wondered about the origins of the place names that we saw on the signs that we passed, directing strangers to the local farms. These names, which make no etymological sense, even to a Francophone, must date back to antiquity.
Some place names, of course, have obvious origins. They may be geographical like Le Puy, or corruptions of the original Roman name like Orleans or Lyon, or they may be named for something found in the area, like Ouistreham, or after a saint like so many of the towns that we have been passing through recently. Scholars can look at these names and explain their origin.
But it's the names of the rural places that are interesting, the names of hamlets and farms and places in the middle of nowhere that must defy explanation by the etymologist. They usually sound French, because they have been spoken by generations of the more recent inhabitants, but they don't mean anything. They probably go back to the tribes that Julius Caesar battled against in the Gallic Wars, and even further, and even then, their origins may have been unknown to the local people at that time. Perhaps they go back as far as the dolmen with the pierced stone. These place names are all that survive of a language and culture.
We are staying at a campsite in a little trailer home or bunkhouse with a room each, for a grand total of 7€. It is three kilometres on the south side of town. The manager had his little joke as we staggered in. "It's not here," he said. "It's six kilometres further on."
But three kilometres south of the town means three less to travel tomorrow on the long section from Chatellerault to Poitiers. 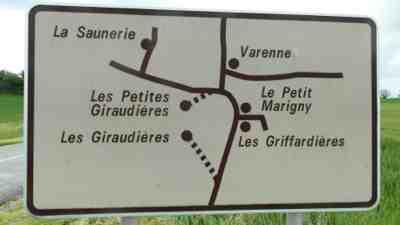 Posted by Carolus Peregrinator at 21:57