What passion cannot music raise and quell?
I have decided, after all, to spend a day in Tours. But I had to move all my gear, including my wet woolies, up a circular staircase to the 3eme etage, which, I remind North American readers, is the fourth floor. A better room for the same price, for only the hardy will climb three flights of stairs.
Like other enlightened cities in Europe, Tours is installing its tramway system. Main streets have been closed down and turned into pedestrian ways with the tramlines down the middle. I wonder whether there was much discussion at the popular level, or did the elected officials simply make the decision because it was the right thing to do?
In Victoria, our elected officials would have waited years before making up their minds, for fear of making an unpopular decision, and once made, the decision would have been challenged, and the protesters would have been out canvassing for a referendum.
"What are we protesting against today?"
"Dunno. Shut up. Just protest."
I wandered around the old town. Tours must have been a big city, even in medieval times, because the vieux quartier is centred around its own church, a massive basilica, now in ruins, and some distance from the cathedral.
Dotted here and there are half-timbered houses, including one which furnished the armour for Jeanne d'Arc in 1492, and to celebrate the connection, and as a good advertising stunt, the armourer took as his sign,
A l'Armee Pucelle
To the maid of the army
The isolated wood and brick houses stand in the midst of more recent construction, but on one square I found the most magnificent stretch of half-timbered buildings I have ever seen.
I wandered back to the cathedral, for I had given it short shrift yesterday. This time the school choir was practising with the orchestra, and it was the Faure Requiem, not the Mozart. I should have known that was what a French school would perform. And it was a young choir too, twelve or thirteen years and up. Like me, other visitors to the cathedral had abandoned their tour, and were sitting on chairs in the nave, enchanted.
If you could have heard the magnificent strains of the Agnus Dei floating up into the vaulting above, and seen the children with the colours of their young faces and clothing against the magnificent medieval stained glass windows in the choir behind them, you would agree with me that there is hope for civilization. I do not believe that these children will be the same again after singing this music.
From Paris to Tours I have not met another pilgrim. But this may change. Many will start from Tours rather than Paris, and indeed, I was not able to get my first choice of lodging for tomorrow night. 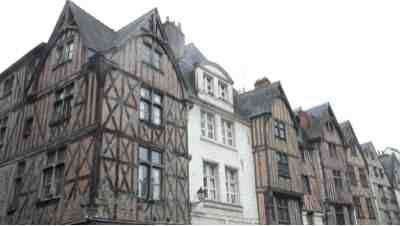 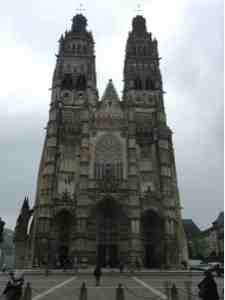 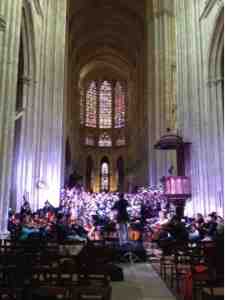 Posted by Carolus Peregrinator at 03:38