It was drizzling as I was about to leave Etampes, so I took off my boots, put on my clammies, put my boots back on, and set off. The rain stopped.

On the way out, I passed two or three dozen men fishing with their rods in what seemed to be a ditch, but turned out to be a narrow river, two or three yards across at most. They were fishing for trout. The fish weren't exactly leaping onto their lines, but a fellow downstream was supposed to have caught one.

I've never understood the attraction of fishing, especially when you stand for hours on a river bank or jetty or bridge without catching anything, and have to throw it back if you do. That's incompleat angling! I feel sorry for the fish. How would you like a hook through your gob? And just when your wound heals, you get another one. I'd rather be cooked and eaten. And I don't think I've ever seen a fisherwoman. Women have more sense. I suppose that these men learned at their fathers' knees that standing for hours in the rain without catching anything was the right and proper thing to do.

I took the main road out of town, climbed steadily up an old Roman road onto the high prairies, and then walked through fields of wheat and canola. And then a field of newly planted peas. Once I was lucky enough to come upon a crop that was ripe, so I helped myself. I ate as I walked. It was a moveable feast.

I marched for several mille passuum in a straight line along the road that the legions must have followed as they went out to fight the Gauls. What long strides their soldiers must have had! Precisely 1.76 yards? What if you had short legs? How could you keep up?

I arrived at Saclas, then walked along the highway to Guillerval. I ate my demi-baguette on a bench beside the squat little church. In the photo, you can just make out the bench where I was sitting.

As I left the village, I passed by what could only be described as a bicycle garden. Rusty bikes and an old carriage were planted along with tulips in a piece of stony ground. I know what my old mate Patrick the Belge would have said. You'll have to go back to Day 5 on the Road from Vezelay to find out.

I walked once more across the fields into a strong, cold wind. Soon I was reassured to see a church steeple and a chateau d'eau in the distance.

Apart from the church, the chateau d'eau or water tower is the most common landmark mentioned in the guidebooks. It is comforting indeed when I read "chateau d'eau visible on the horizon", and then it appears. I know I'm on the right road.

I noticed a patch of broom to one side, without a heavily armed troop of volunteers trying to root out the foreign invader. To the west, I could see a line of wind turbines, eolienne harps with a harsh music of their own. A hare as big as a kangaroo bounded across the road in front of me at the speed of a TGV.

Just before Monnerville, I heard a familiar sound above my head. I looked up and there they were, fluttering and trilling away in the clouds, as happy as -- larks. My heart leapt up. I was reminded of a quotation I had seen last year.

I found a bar in Monnerville and had a large coffee. I asked about a short cut, for the last step followed two sides of an isosceles triangle, the hypotenuse already taken by an autoroute. But there was none. She said I wasn't the first person to ask.

Off again, first to the south, then to the west, where the wind was now so strong it was slowing me down. I literally pushed on into Angerville, hungry and tired.

The priest received me hospitably at the presbytery. Very comfortable, I thought as I looked around. Then he took me out to my digs, a tiny bed in the corner of a large church hall. Another grande chambre! He showed me his church, and two tall pine trees that had been standing up against the back wall for 200 years. These I found more impressive than the church itself. When I asked, he told me that he had a congregation of 200 people. "That's a lot," I said. "It must be due to your homilies." For once, my pleasantry didn't fall flat. 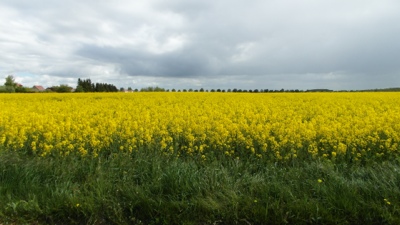 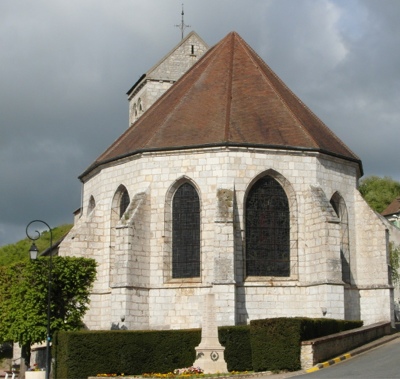 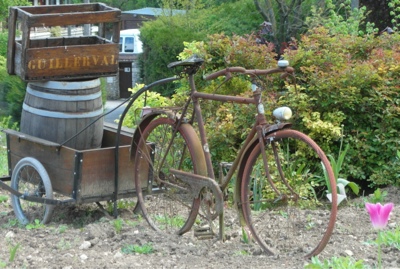 Posted by Carolus Peregrinator at 02:45