So all day long the noise of battle rolled
Today, we walked in the footsteps of the Romans, the Moors, and the medieval pilgrims.
We set out into a thick mist. It was cold. We had eaten breakfast in the caravan, and hoped to find coffee along the way.
The mist was lifting a little as we crossed the Vienne. A cuckoo called. Was it mocking our hopes of finding coffee at Cenon-sur Vienne? Indeed it was! The bar was closed.
We headed south on an old Roman road which had once linked Paris and Bordeaux. It would take us almost in a straight line to Poitiers.
Following the crests of the hills, much of the route had avoided being paved over, and survived today as a farm track. The ancient roads which linked the villages on rivers and in the valleys were the logical routes for the bitumen which followed, but some of the higher military roads which stretched in straight lines between the Roman camps had escaped this fate.
Part of the road was now on a bicycle circuit, and the cyclists were out in force on what was now a fine Sunday morning. The chariot ruts of the past had become bicycle treads which stretched from one side of the road to the other. But in places, the road had become a bog.
Soon we passed Vieux Poitiers, where a tower was all that remained of a Gallo-Roman theatre. Archeologists were excavating the rest.
We stopped for a snack at the site of the Battle of Poitiers, where Charles Martel had driven back the Moors in 732 AD. What a battle that must have been! A turning point in history.
Continuing, we followed the route they had taken. And later the medieval pilgrims.
How can we be sure which path the pilgrims had followed when so many modern roads now link the the towns where they had stayed? In this case we can be certain that they had taken the route we were now following, since it led directly from Chatellerault to Poitiers, important pilgrim centres.
Providence smiled. The via Romana had become a bitumen road, and we came upon a golf course, which I remembered from previous years would have a clubhouse with a bar for the members. We took pains to scrape the mud from our boots, and sat down with a coffee in comfortable chairs overlooking a lake.
We continued across the gentle hills, enjoying the sun. This was probably the first really fine day I had experienced since Paris. The temperature reached a high of only 15 degrees, but it was warm in the sun.
Cooler, though, as we passed through some woods on the approach to Poitiers.
After another five kilometres, we reached the centre of town only to find the Office de Tourisme was closed. We had hoped to be directed to some cheap digs. Instead, we are staying tonight at an Ibis hotel close to the centre of town. 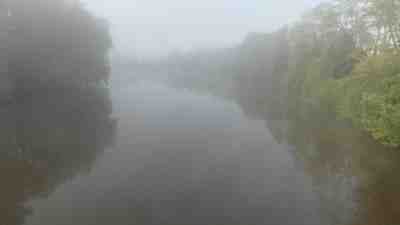 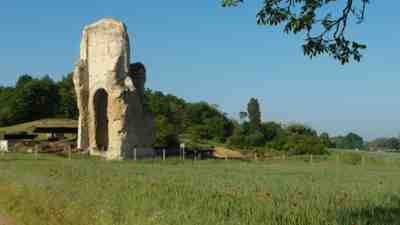 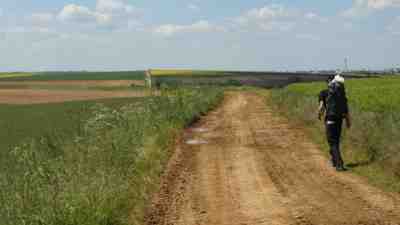 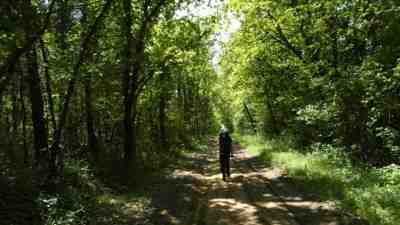 Posted by Carolus Peregrinator at 21:50