I am in mud
Stepped in so far that, should I wade no more,
Returning were as tedious as go o'er.
It was supposed to be fine weather today, and it was, when I looked out the window on waking up, but by mid-morning the sun had disappeared, and rain threatened. But it held off until I arrived in Sorigny.
I took the rue Colbert down to the avenue de Grammont, the former main road which now hosted the tram lines, and headed south. This route would have taken me direct to my destination. O that I had followed it!
I walked along the tracks, pretending I was a tram, when I heard a clang, clang, clang behind me. I thought of Judy Garland. Then I moved off the tracks. Although the system begins operating in September, the trams are making trial runs from time to time. And they really do go clang, clang, clang.
I noticed that in town, the trams get their power from a third rail, which by some new technology poses no threat to pedestrians, but outside the city centre, they use an overhead wire. The change occurs at the railway station, where they arrive, drop their pantograph, and continue, overhead-wirelessly into the centre. It's more pleasing to the eye without the poles and wires, explained an official. More expensive, though.
I continued along the main road for a while, crossed a couple of bridges, and then dropped down to walk east along the bank of the Cher. I passed a couple of weeping willows, and then a fisherman who seemed to be catching logs rather than fish. Then I left the river and walked into the pleasant little village of Saint-Avertin, where I stopped for a coffee.
I am following another guide which I bought yesterday, a rando-edition, a companion to the Chemin du Puy and the Chemin d'Arles which I have used before. I will let you know if it's better than the other one after I haven't got lost a few times.
No guide could have prepared me for the next obstacle I faced. I was walking merrily along, when I came upon a sign:
Route Barree. Chantier Interdit au Public.
I knew what it meant, but decided to pretend that I didn't, because to do otherwise would have meant a long detour. It was a motorway construction site. Graders were moving back and forth, and my path had disappeared under mountains of dirt. Workers were occupied with what they were doing and didn't seem to have noticed the intruder. I followed a temporary road made by the trucks, and when I spied some trees off to one side, I thought I would cut across to the woods before I was challenged.
I left the road and stepped into a Flanders field of mud. Sinking in to the top of my Zambs, I squelched across, picking up more mud with every step. But when I finally reached solid ground, I was accosted. What was I doing? Didn't I know that the site was closed to the public? Eventually, they decided I was stupid rather than non-compliant, and sent me on my way. Now I was back on my path.
I passed through the village of Montbazon, and looked up at the 11th century fortified tower, now crowned with a 30-foot statue, a result of the fervid devotion to the Virgin Mary in the 19th century.
Back on the highway, I put my head down and marched the remaining five kilometres into Sorigny.
I am staying at a reasonably priced (30€) chambre d'hôtes, and eating a reasonably priced menu du jour (11.50€) at the pub. Wine is included. Another pilgrim, Steven, a Belgian, is staying at the chambre d'hôtes as well, the first fellow walker I have met since Paris.
There is something about cheese, isn't there, at the end of the meal? It brings out the flavour of the wine, and is itself enhanced. 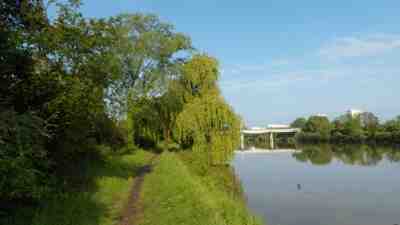 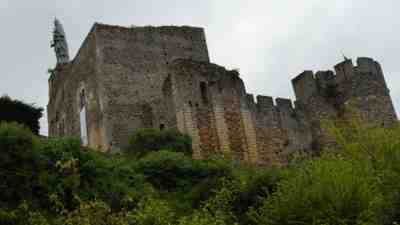 Posted by Carolus Peregrinator at 06:27