I met a young lady called Tessa
Whose pack did seem to oppress her.
It was laden with reams
Of natural creams,
And oils to relieve every stressor 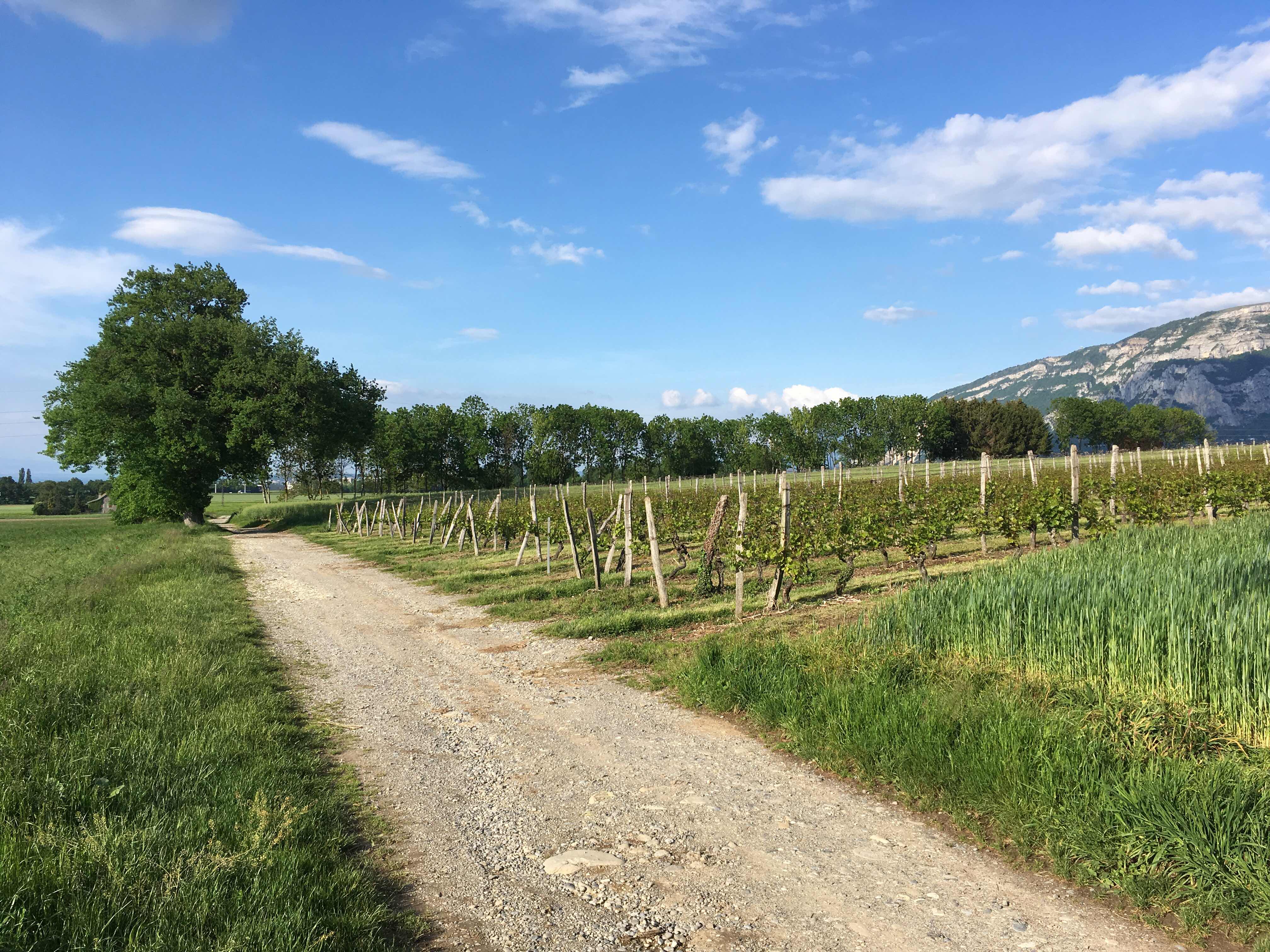 Geneva didn't seem very Swiss to me. No mountains with yodellers touting cough lollies, just a lot of dusty apartment buildings like so many European cities. No, that’s not fair. I didn’t go up the hill to the old city. I was anxious to get out of town. I followed the tramlines out to Carouge, and then the directions of helpful residents. As a result I zigzagged my way to Neydens adding an extra two or three kilometres to the specified distance.

It’s funny how you form a visual impression of a place from the name and position on a map. I imagined a church and a cluster of old buildings. But no, it was very suburban. The gîte was in a camping complex on a busy residential street leading up to a very busy main road. In the other direction, a couple of kilometres away was a huge shopping mall with an enormous supermarket. Not very rural at all

I can't recommend the gîte. It was in a distant section of a huge camping complex so far away from the main office that the proprietress had to drive me there in a golf buggy on a journey that took about as long as my Victoria-Calgary flight. Along the way we passed happy campers playing pétanques or sitting outside their huts and recreational vehicles.

Europeans love camping. And it doesn’t have to be in the wilderness or even in touch with Nature at all. They are quite happy to camp on a tiny plot with a little bit of green in closer proximity to their neighbours than at home.

Eventually, we arrived at the gîte, situated in the loft of a large building that housed the ablution block. Directly below was the camper van sewage discharge facility, but fortunately, nobody was emptying while I was there. To get to the toilets and showers I had to descend and walk around the block.

The showers were controlled by timer taps. You press them and get 45 seconds of hot water before you have to press the tap again. The trick is to lean against it and pump it up at intervals to ensure a steady stream of hot water, not unlike playing the bagpipes. But not this one! Leaning against it interrupted the flow, and caused it to shudder, and worse, it was hardly a stream of hot water at all, for the droplets were so fine that they were air-cooled by the time they hit your body. This was perhaps the the only shower I’ve taken where I felt worse afterwards.

I thought the gîte was expensive at €15.50, especially when it offered no cooking facilities. I had planned to have a nice meal with the wine and sausage that Paul and Michelle had bought me in Lyon as I changed trains, for I wasn’t about to pay the exorbitant prices for a meal at the camp restaurant.  But there wasn’t a corkscrew to open the wine (this was in France!) and there wasn’t a glass to drink it in, and there wasn’t a knife to cut the cheese and the sausage. I had to improvise.

That was a good rant. I feel better.

As I was eating, I was joined by Tessa, a young German woman. I offered to share my wine with her because I was was hoping to begin the day with a clear head. But she had just come from a Buddhist retreat and was shunning noxious substances. During the day, she had developed a pain in her foot and so had visited an osteopath in Geneva. He put some blue tape on her foot and charged her 110 Swiss francs. Then she went to see an acupuncturist who took it off and charged 100 francs. Very expensive, Switzerland!

We compared packs, as she had noticed that hers was so much heavier than mine. The weight of our clothing was essentially the same. But the extras were revealing. Mine was laden with electronic gadgets and their accoutrements; hers, with creams, ointments, unguents and naturopathic remedies.

She was a congenial roommate and I hope we run into each other again.

Posted by Carolus Peregrinator at 07:58