Get thee up into the high mountain 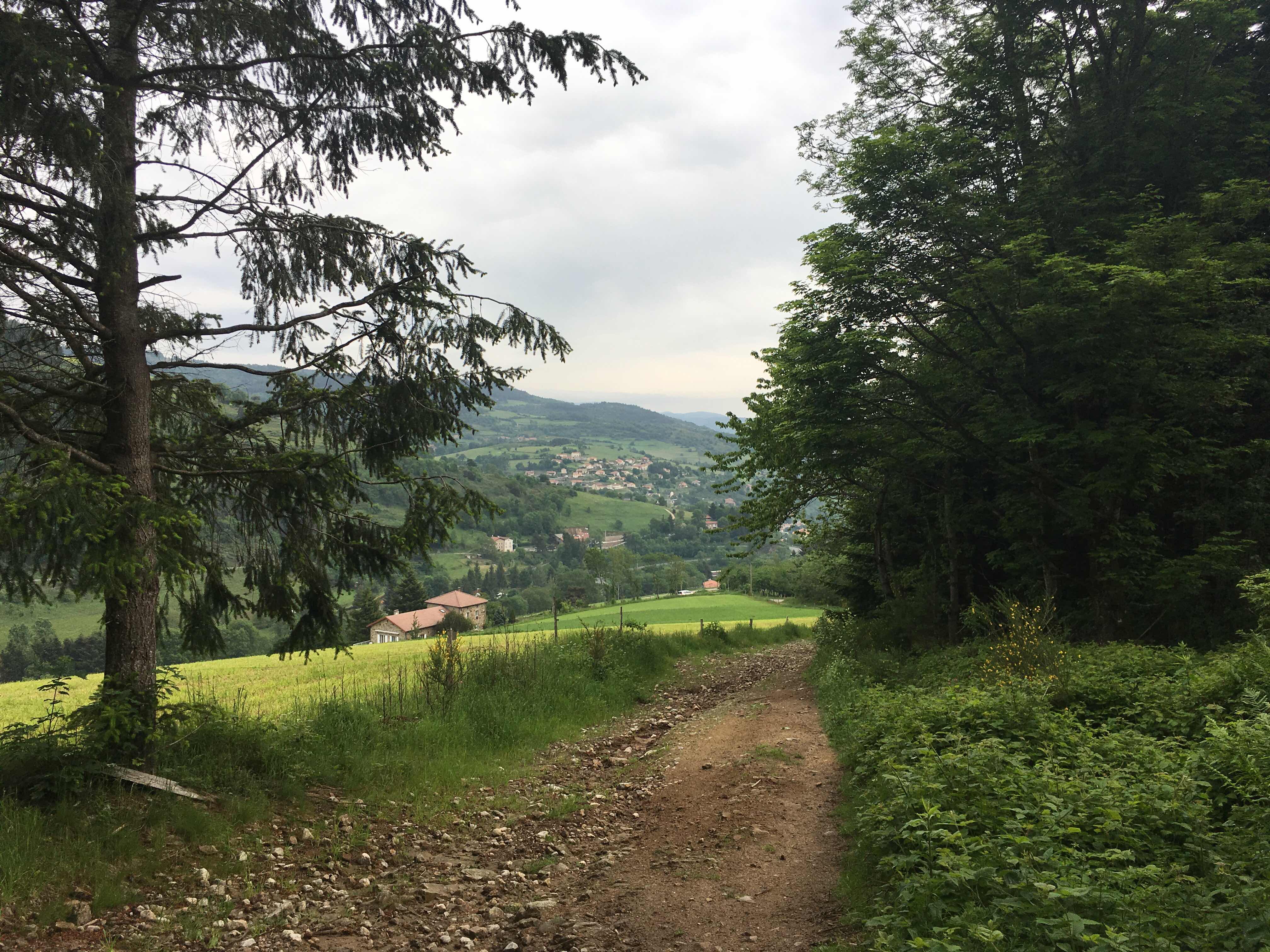 I enjoyed my time in my shack/chalet. I was cosy and comfortable. I felt a couple of creatures crawl over me in the night, but they may have been imaginary. The hut was one of several reserved for pilgrims, but I was alone.

The campsite was run by a pleasant couple, but there was a sadness about them. His friendliness seemed almost forced. She seemed rather worn down. When I asked why there was no paper in the toilets, she said that the people take them.

“The pilgrims?” I asked, knowing that the wise pilgrim keeps an emergency roll in his back pocket.

It must be hard to make a living running a campsite. Lots of work keeping it in good shape and huge expenses keeping facilities and cabins heated. There couldn’t have been more than a dozen people staying last night to cover these expenses, let alone make a profit.

Leaving the campground in the morning under a sullen sky, I walked 600 metres up the road to pass under the old railway line. Unfortunately, the GR continued up the hill, while the line took an easy gradient to the right. I suspected that we would end up in the same place and that the GR was perversely taking me on a detour into high places.

The only sounds were the snarling of a chainsaw and the mournful howling of a dog in the distance. No birds sang. A wide rocky path led into the depths of a dark pine forest.

I climbed in long zigzags up a forest track to a shelter and then around the contour of the valley.

It started to rain so I made preparations to don my poncho. This is a difficult business if you are by yourself. You have to orient it so that when it’s on you’re looking out of, and not into, the hood, and then you fling the whole thing up into the air and over your head, hoping that it comes down behind you with the back flap settling over your pack.This is an impossible process in the wind, but today it was calm, and I succeeded rather well.

I came upon a couple of friendly foresters who made a predictable comment:

One of them offered me a chunk of the bread he was eating, but I declined. Kind of him though. I took off again up a rocky slope until the track levelled out around another contour. I arrived at a place where four roads met, and where two GRs crossed. A fellow emerged from the bushes with a big, brown paper bag. “Les cèpes,” he said. Wild mushrooms.

I continued up and up through dark, silent woods, no undergrowth, just a bed of dead pine needles on one side, and some younger trees pushing up among their elders on the other. Finally the path levelled out at 1280 metres, and I began to descend.

Emerging from the forest, I looked out on a vast plateau, a low range of hills in the distance. This was the beginning of the Massif Central. In the foreground was the hamlet of Les Setoux where I knew there was a gîte. It was open with a message on the door inviting walkers to come in and make themselves at home.

It was really too early to stop, for it was barely noon, but a couple of telephone calls revealed that there was no accommodation further on, so I have settled in at the gîte, done my washing although I can’t hang it outside to dry, buttered a few crusts of bread left over from someone’s breakfast, and I’m hoping that the hospitalier will arrive to cook me supper. Otherwise it will be stale bread for breakfast, dinner and tea.

The wind has been increasing all afternoon, making waves in the grass and tossing about the Queen Anne’s lace, or it is yarrow? The big trees shake about violently, the younger ones bend over. Mist rises from a valley over the ridge. A herd of cows huddle together for warmth, looking absolutely miserable. Only a few chooks scratch about in their yard; the rest have headed for shelter.

Posted by Carolus Peregrinator at 12:42