I walked along a grassy lane,

Redolent with the recent rain,

And then a stony path ensued,

Arriving a little the worse for wear 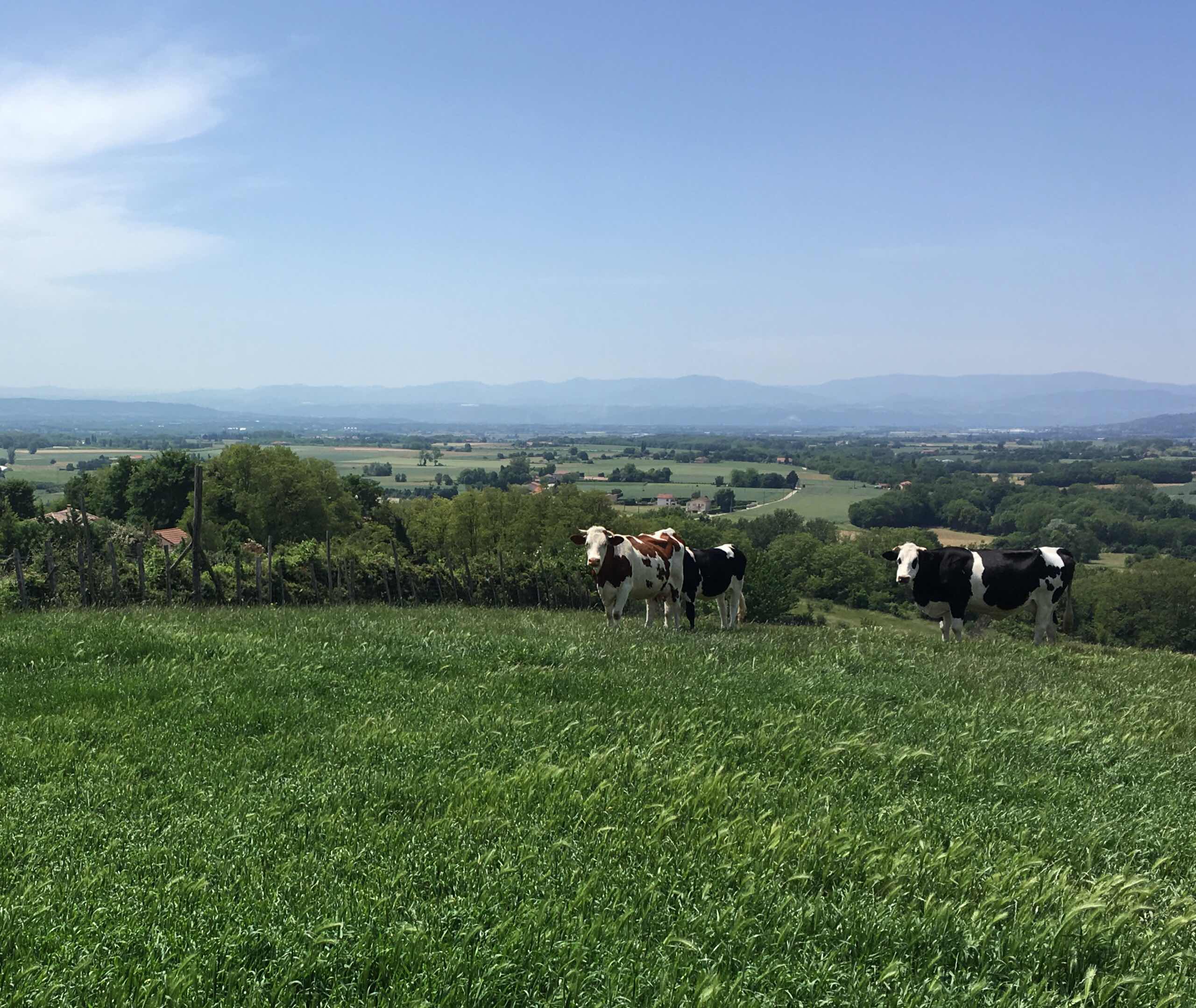 We were rather concerned this morning at breakfast when we learned that all the accommodation along the way was booked for tonight. Our wonderful hostess took it upon herself to find a place for three. She busied herself for half an hour phoning around, telling us between every conversation that we should have booked the night before.

Indeed, her own establishment was pretty well full when we arrived but she made a quick calculation, bustled around and found a place for Heidi in the house, me on a sofa bed in a farm kitchen next to the garage, and Philip in the regular quarters for guests.

Just as we were leaving, she called us back and told us that she had a place for us Chez George on the Variante.

Last night’s meal was superb. We began with an aperitif accompanied by salad and little pieces of pork pie that could’ve come from Melton Mowbray. For the main course we had big slabs of pork and rice embedded with little chunks of sausage. And then the cheese. And then dessert. And finally a digestif. I shunned the whiskey and chose a kind of schnapps with a red hot punch. All in all, it was a meal to remember!

Breakfast was also remarkable, for along with the traditional coffee and baguettes, we each had a googy egg.

On the easy walk across the fields towards Pommier de Beaurepair, I reflected on the generosity of this woman who had gone out of her way to help us. When I thanked for this she said, “C’est mon travail.”

Towns like this, and there are many all over France, enjoy a kind of half life. The church and the mairie and a few older buildings around a square form the core of the town, and around them are some more modern houses, but there is no longer any commerce. The mairie opens for a few hours each week and the bar when it feels like it. The residents, who probably commute to work elsewhere, pay their taxes and this keeps the town functioning, but that is all.

Some of the bigger towns have fared even worse, if they have not managed to reinvent themselves when the particular goods they once produced in small factories are no longer needed. I have walked into towns with disused factories with rusty machinery on the outskirts and boarded-up shops in the interior.

I walked on through a forest, passing piles of stacked wood and areas of wasteland where the wood had recently been cut. Then along the road to a bar at Revel-Tourdan where I had a bite to eat.

Down the highway and across into another sweeping valley, more refined somehow, with gentle ups and downs and smaller farms. Through some fields of wheat and barley and canola, and then up a hill and alongside the TGV tracks for a while before passing under the line, and along minor roads unti I reached a chateau d’eau where the the Variante d’Allemane left the GR. Close by was a pilgrims’ shelter. Four were already there in various states of exhaustion. I joined them, and stretched out for a brief repose, unaware that I was being photographed. Then I marched on in the heat and eventually reached the accommodation Chez Georges.

Posted by Carolus Peregrinator at 06:12