Buttercups float above the sward

As, on the Way, I head toward

Sights and sounds assail my senses, 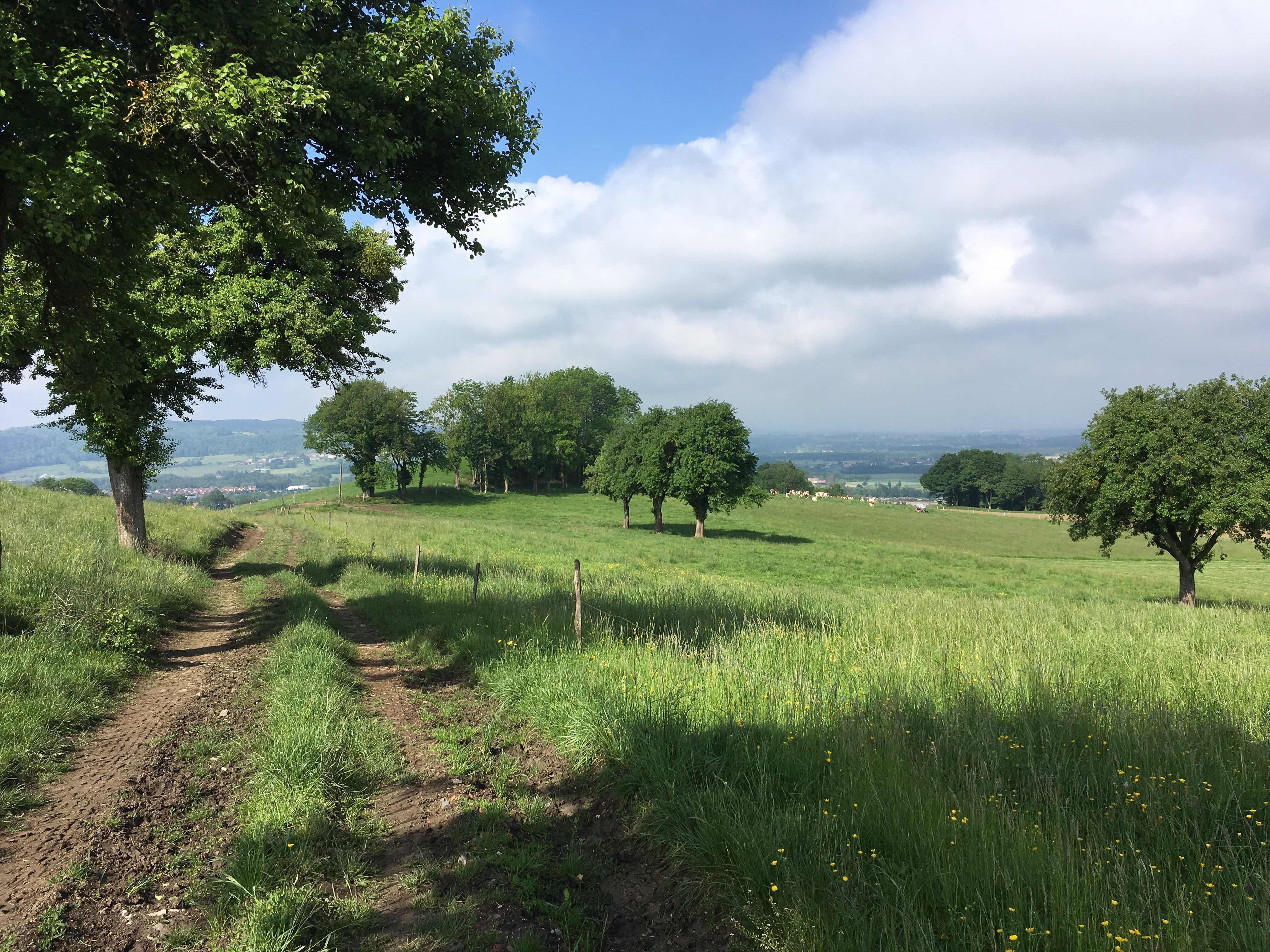 Strangely, we didn’t pass through the Col de Sion, but across it, coming down from a hill into the valley which formed the pass, and then up the hill on the other side. I had climbed steadily during the morning after my typical French breakfast at Bar le Forge: a large coffee and a couple of croissants.

Up a minor road, through a housing development, into the woods, and then out of the forest into the full sunlight, clouds atop the hills, buttercups floating above the green fields, cattle clustered in the distance, and ahead the village of Beaumont. A blackbird sang. This is why I walk the Camino.

I am never eager to set out on these walks. As I drive to the airport for those tedious flights across Canada to Toronto or Montreal I ask myself, why am I doing this again? But when I settle into the flight to Paris in the dim light against the muffled roar of the engines, and I’ve made my choice of chicken or pasta and I see the drinks trolley approaching laden with plastic bottles of cheap red wine, my spirits revive a little. What is it about Air Canada’s plastic plonk? I love it. And then, when I arrive, and begin walking, and reach the high places...

A little further on I passed some cows happily munching grass next to the fence. One was wearing the most musical bell I've ever heard, more like a church bell than a cowbell, emitting not the usual tinny croak but a real chime.

My destination was the gîte in the little village of Charly, only 13 kilometres on, for I was planning to take it easy, but when I arrived the day was yet young, and according to the profile in the guide, it was downhill to the next gîte at Chaumont. And it was for most of the way, but when I neared the village I was puzzled by a sign which said Chaumont - 5 kms - 2 hours, 20 minutes. Surely it didn't take that long to walk that short distance! It did, for it was uphill all way. The climb was brutal, brutalissimo, in fact.

Just before Chaumont I heard voices off to the right of the trail. I peered through the bushes and saw a group of people at the foot of a sheer rock face. They were preparing to climb up a vertical slope twice the angle of my ascent. Finally I arrived, and walked a further 200 metres uphill to the gîte L’Esperance. I hoped to find accessible facilities.

I should not have made disparaging comments about the ablutions at last night’s gîte. Perhaps some of Tessa’s karma was affecting me, for to reach the toilet here, you have to leave the gîte and make your way down treacherous, twisted, uneven, stone steps to the street and into an old cellar, and there behind the dunny door was a squatter, not an inhabitant living rent free, but a primitive toilet sans seat where you were on your own, so to speak, feet in the stirrups, hanging on to the sidebar for grim life, This was the worst facility I have experienced on any Camino, anywhere. I managed to save myself for later at the restaurant, and visited the garden during the night.

I had dinner across the road at the Auberge de Pralet which offered a pilgrim’s menu for €15. I ate with my new companions from the gîte. Heidi was from former East Germany and unlike my Estonian companion from the Via de la Plata had no desire to return to a Communisr regime. She was free, she said. Philip was a Swiss doctor practising Western medicine two-thirds of the time and Chinese medicine for the rest. He uses Chinese practices for aches and pains but Western science for serious illnesses. A nice balance, I thought.

Posted by Carolus Peregrinator at 22:51