...every mountain and hill made low, the crooked straight, and the rough places plain 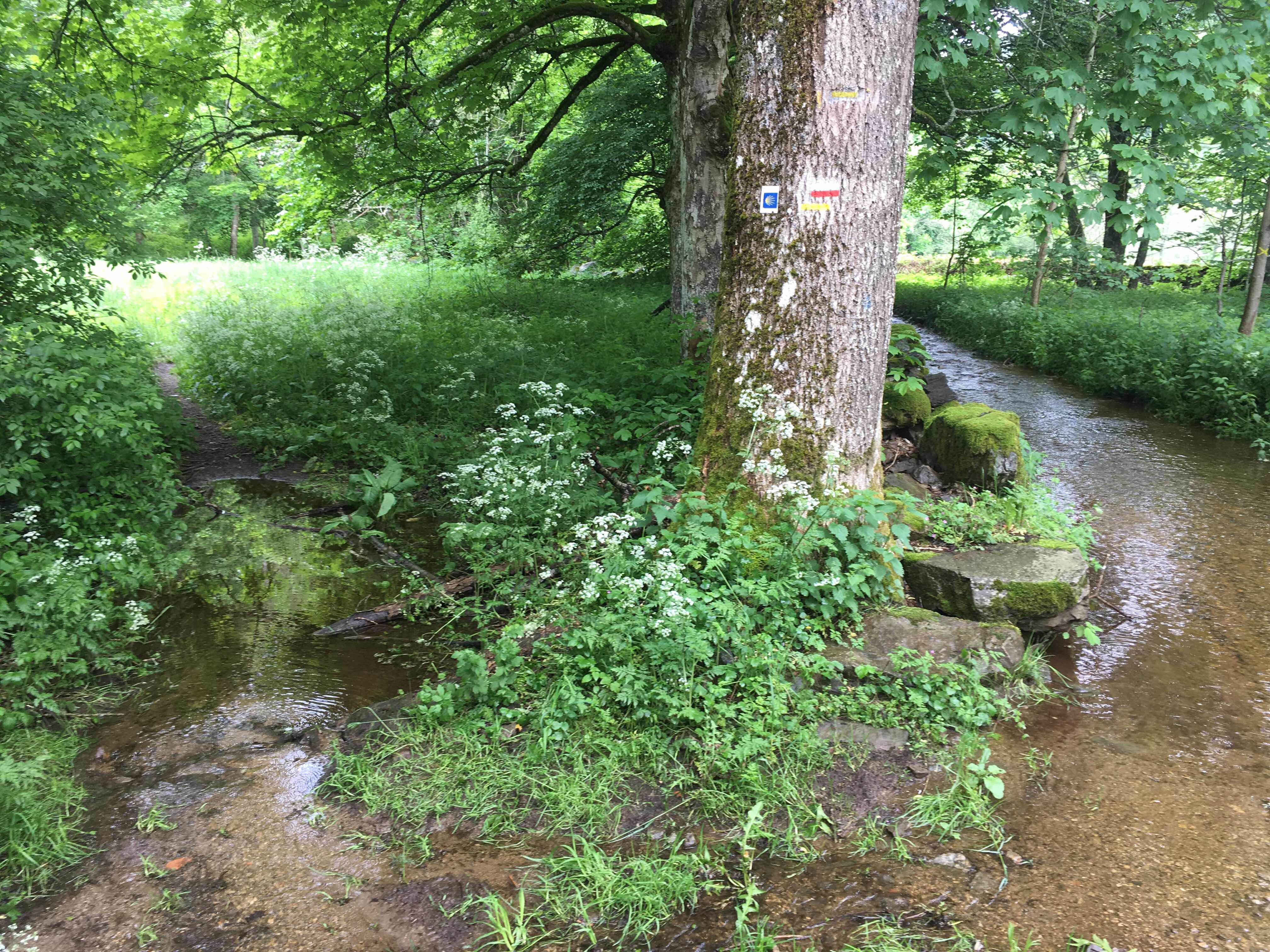 About six o’clock in the evening a little girl appeared at the gîte to tell me that her mother would be arriving to prepare supper. And a superb supper it was: charcuterie de la region, and then a mountain of beans with great slabs of beef from the hospitalier’s farm, and then cheese with a particularly nice blue, also from her farm, and then cherries for desert. At my request she turned on the heat, so I draped my washing over the radiators to dry.

During the afternoon, as I sat about in pensive mood, I was startled by a large crack, as if something had snapped or a coin had dropped on the floor, only much louder. A couple of hours later, it happened again, and I noticed on the far table a kind of radiator with two blue fluorescent bars: it was a fly zapper. Now the flies are bad here, as they are wherever there are cattle. In the gîte they were on the table and in my hair.  But here’s the point of my story. With a fly swat I could have killed a dozen in a few minutes whereas in the ten or so daylight hours I spent in the gîte there were only three zaps. So don’t waste your money on a fly zapper!

There was another odd noise as well, a low moaning which developed into a muffled roar like Balrog stirring in the bowels of the mountain. I put it down to the hot water tank or some other aspect of the plumbing.

Raindrops were splattering in the puddles as I ventured out of the gîte this morning, but despite the rain I was expecting an easy day. After all, my path stretched out across the plain into the distance and there weren’t any mountains ahead. However, on two occasions I could have come to serious grief.

After several easy kilometres along the road, it was a day of ups and downs, through the forest and up to a ridge and then down the valley on the other side. These were pine plantations again, with stripped trees stacked along the side of the road, and once I came upon a monster caterpillar tractor hauling logs and turning the road into a mud slide. 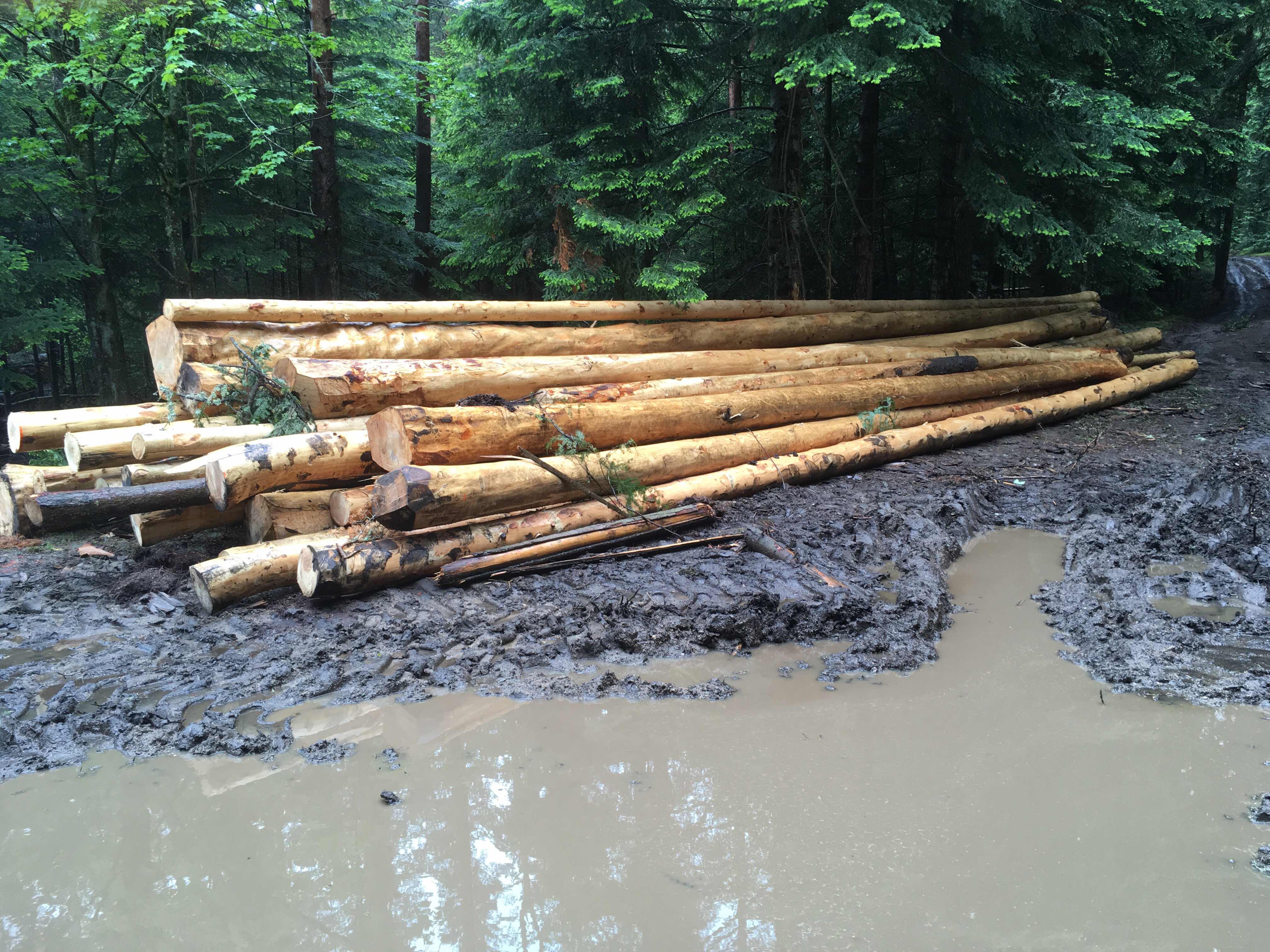 It was on one of the descents to the bottom of a valley that I encountered my first difficulty. I had arrived at a bridge crossing a stream when I found that the stepping stones across a little tributary were underwater and I couldn’t reach the bridge. A little upstream I managed to jump across the little feeder stream to reach the bridge, cross over, and continue on my way. Not so simple. The track doubled back to cross the stream once more, returning to the bank from which I started. But this time there was no bridge, but the most perilous crossing I have ever seen. No way would I risk crossing on those slippery concrete poles! One of them was flat, but the other at a treacherous angle. 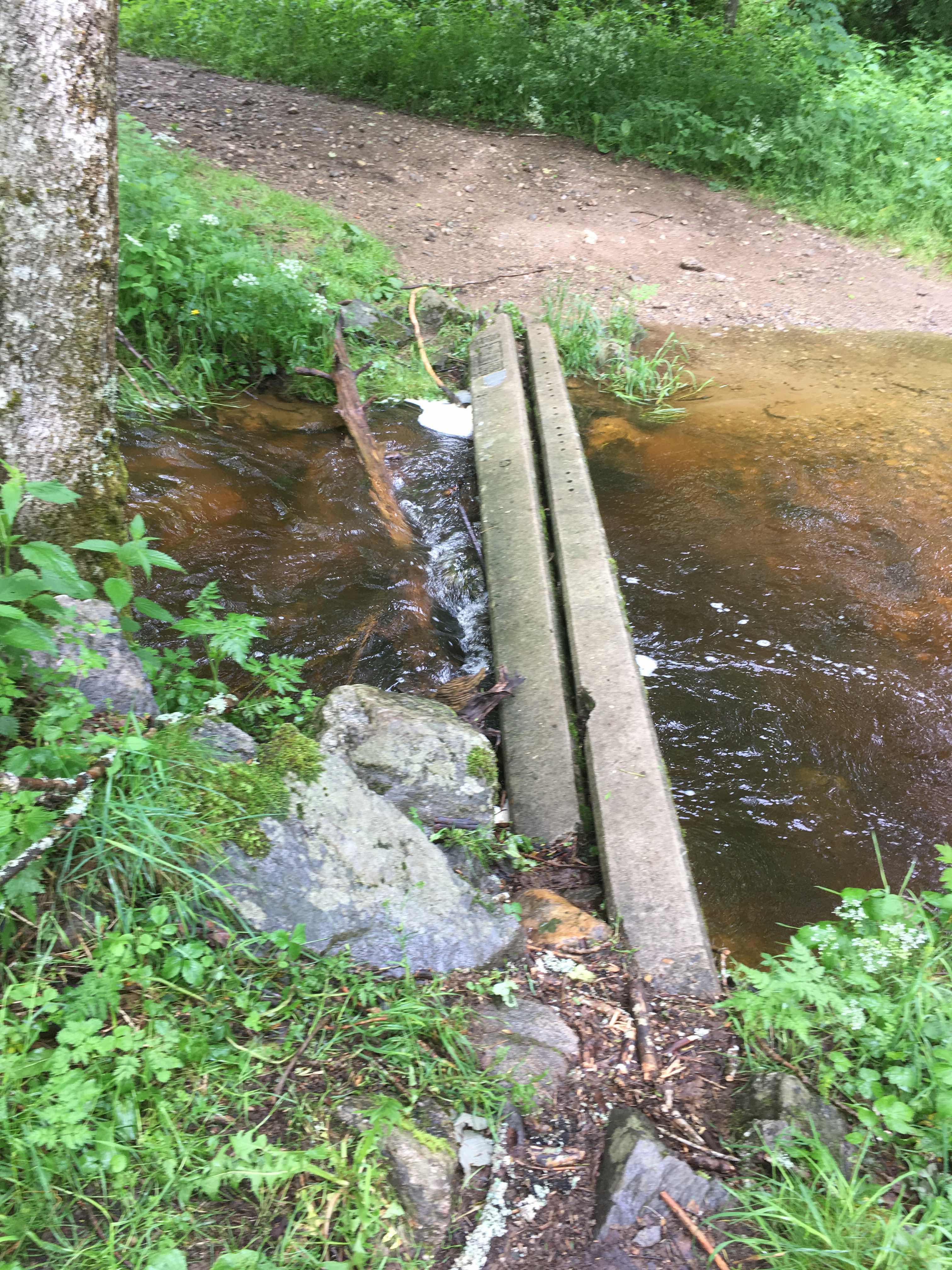 Ah. I would retrace  my steps, cross the bridge, and continue on the other bank. But there was no path on the other side, just a vast expanse of stinging nettles. No way could I pass through there. I returned to the concrete crossing and considered my options. Take off my boots and wade across? No, too deep with slippery rocks. I needed a pole. I searched in the woods, found a long branch, dug it deep in the bed of the stream and took my first steps. When I reached the middle, I took one long step and leapt to the other side. Lucky! It could have been disastrous. I thought of Bluebottle, or was it Eccles, who would have said, “He’s fallen in the water.”

After that, it was up a steep rocky path Into to the forest again. As I’ve said many times, I could not have managed this walk without serious leather boots. So much of the path has been rocky, and I’ve been up to my ankles in water.

Eventually, I came out of the forest onto the fields where I could see Montfaucon in the distance. It was here that I had my second brush with danger. Along the lane ahead of me was a petrol can. 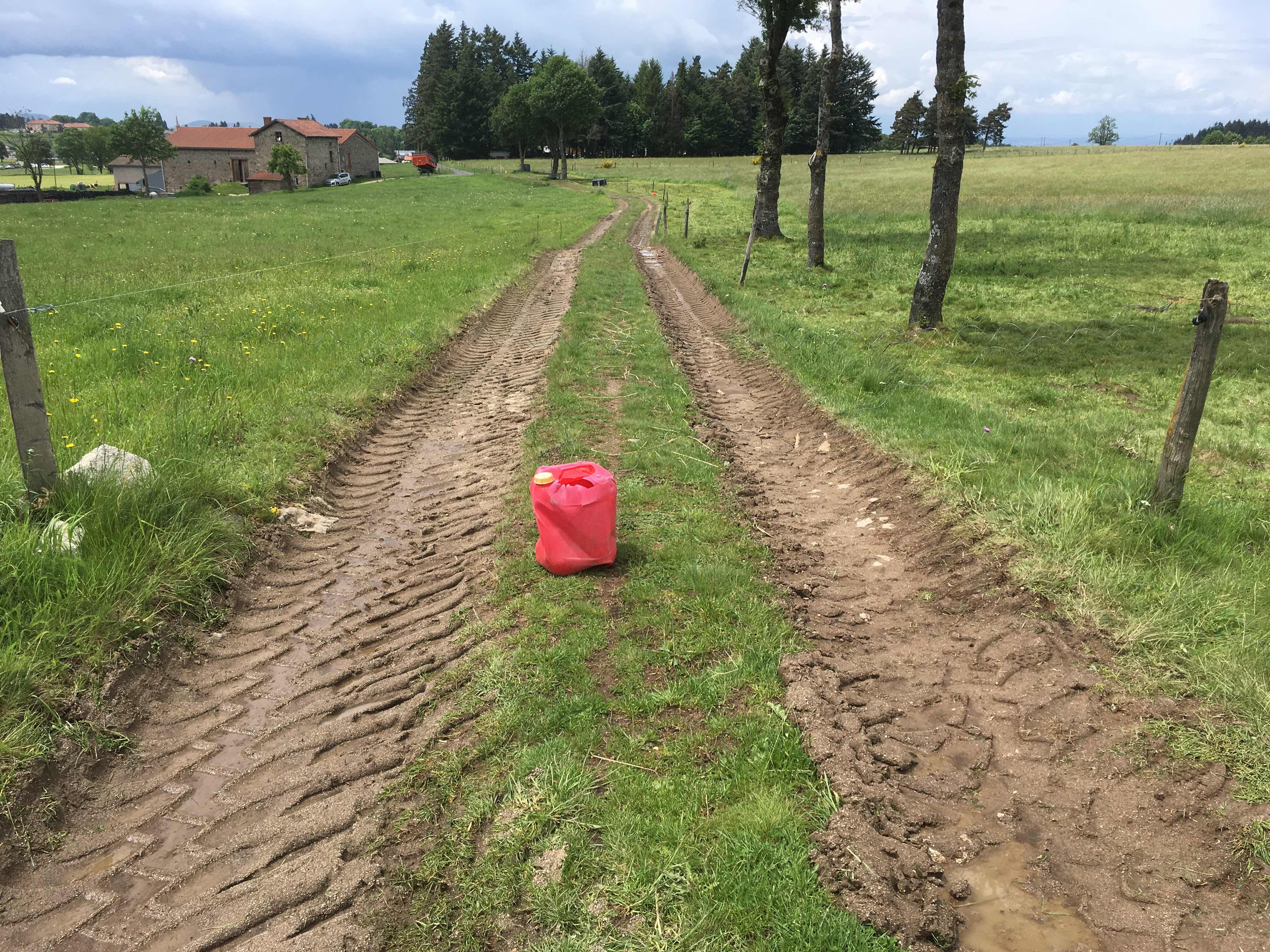 Looks innocent enough, doesn’t it? I occasionally see them by the road, left by a farmer after refuelling his machinery. Strange place to leave it though, in the middle of the lane. I was about to pass it, and then, just in time, I saw why it was there. A farmer had stretched his electric fence across the road, and left the can as a warning. No ribbons hanging on the wire. Not very effective. I almost got zapped.

I walked into Montfaucon and found a place at the municipal gîte. It is clean, warm and comfortable.

Posted by Carolus Peregrinator at 21:34