This parting was well made 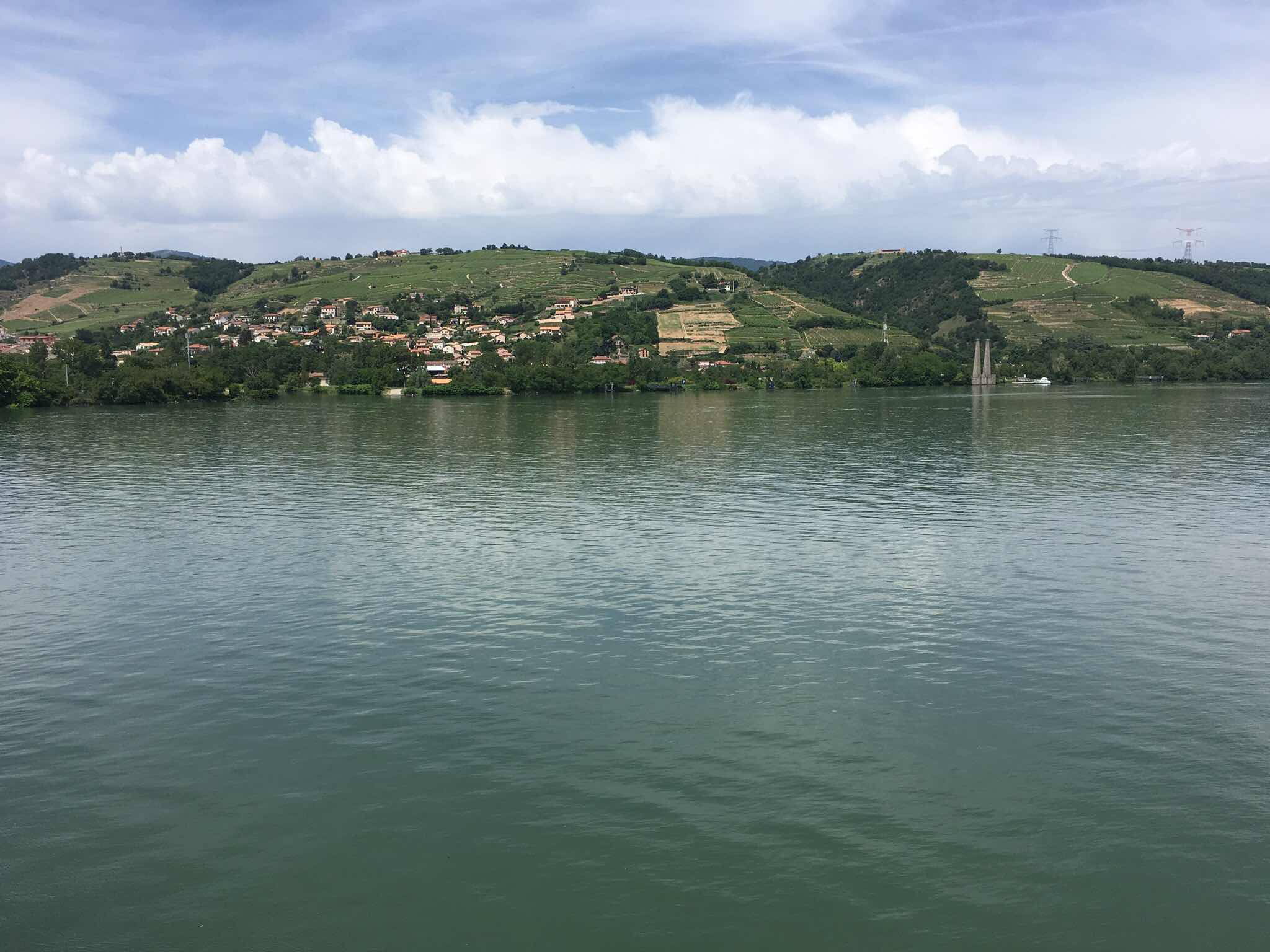 Georges was an interesting character, ebullient, a little nervous perhaps, and anxious to please. He described himself as original. His was an organic establishment. We ate vegetables from his garden and eggs from his chooks. We drank wine from an organic winery.

After a few kilometres across the fields and through the woods, I emerged on the side of a hill and looked out over the valley  of the Rhone, beyond which were some serious mountains. I could see some large areas of water, possibly spillover from the river, and industrial buildings including a nuclear power station.

During the morning I passed a party of walkers. A randonnée reveals not only the fitness but also something of the personality of the individuals who make up the group. First there is the advance party clustered around their leader who is consulting his map and giving directions. The keenies. Then there is the main body of the party strung out in knots of twos and threes, enjoying their conversation but anxious not to fall too far behind. And then the laggards, strolling along, enjoying the walk and smelling the roses, as it were.

The latter bade me more than a polite bonjour. They stopped to chat. They wanted to know where I was from, where I had come from today, and where I was going.

They assured me more than once that I would find good wine at Chavanay. I reflected that in England they would have told me that they serve a good pint at the Ploughman’s Ear; in Australia, a nice cold one at the Dumbleyung Hotel; in Canada, a Fat Tug at the Penny Farthing.

You have to be careful when ordering a pint in Canada to make sure that you get the real thing (20 fluid ounces) and not an American pint (16). The Penny Farthing mentioned above is frequented by a number of Brits who insist on a real pint. I believe that the owner has told them he can guarantee them only 18 ounces, because he doesn’t want his servers to spill the beer. I say, why can’t he get bigger glasses with the level of the pint clearly marked on the side?

In Canada we have seen many social and cultural improvements over the years, making life more enjoyable for its citizens. But none compares to the advent of craft beer, with new flavours, exotic names and colourful labels. Interestingly, this is one industry where the big corporations have not put the small producers out of business.

Gone are the days of Molson Canadian and Labatt’s Blue, which, I remember, they would serve two glasses at a time to minimize the number of trips to the bar. Twenty-five cents each.

I walked on across the fields crossing railway lines, a motor way, and eventually the Rhone.

I am staying tonight at the Gîte Pelerins de Ghislaine Gaillard at Chavanay. I have been pushing myself along the flatter terrain to leave myself enough time for a leisurely crossing of the mountains, and today I decided to take it easy. I arrived around one o’clock, and have spent a relaxing afternoon on my own.

I bid farewell to Phillip and Heidi. We enjoyed one another’s company, I think. So far on this walk I have met eight people: one German Swiss, two Austrians, and five Germans.

Posted by Carolus Peregrinator at 22:13