[If you have arrived here at the end of my journey from Paris to Saint-Jean-Pied-de-Port, and you would like to follow it, and you don't want to read backwards, you might like to visit my website (See right under Links) where I've posted the entries in chronological order. Just click on "Chemin de Tours"]

I find the walk into Saint-Jean a bit of an anti-climax. Once you come down from Ostabat and hit the main road, it's pretty much a straight line from there. The GR makes half-hearted attempts to get you off the bitumen, but these are little loops that take you off only to bring you back again, adding unnecessary kilometres, so I just put my head down and made my way along the highway.

The last few kilometres are more interesting. I left the highway to pass through Saint-Jean-le-Vieux and then La Madeleine before arriving at the gate of Saint-Jacques at Saint-Jean-Pied-de-Port. It was a three-hour walk.

The Pilgrims' Accueil, however, run by les Amis de Saint-Jacques Pyrenees-Atlantiques, the same group that plants the fruit trees, does a sterling job advising pilgrims and keeping statistics. When I visited, six volunteers could hardly keep up with the new arrivals.

I think there is already a competitive jostling among the pilgrims as they get ready for Spain, where they will be racing to get the places in the auberges. If I ever walk the Camino Frances again, it will be very early or very late in the season.

I am now quite fit, not exactly Jack Sprat, but I've certainly lost a few pounds. The trouble is that from now on, it's summer barbecues, beer and wine, and, if I'm not careful, I will be back where I was when I started.

It has been a good walk. I will remember the cold, the rain, the larks, some wonderful towns I passed through, and interesting people whom I met both on the road and at the gites. But it's been a lonely walk, not one for the extrovert. In that respect, it was similar to the Chemin de Vezelay, but more interesting.

I will also remember the hospitality shown by so many little communes in providing gites to pilgrims, at what must have been a financial loss. I thank them.

I met someone on the road this morning who was doing the Chemin du Puy for the second time. I asked him how he found it the second time around. He said he was in better shape physically, but not mentally. I think the latter is more important.

If you are not fit at the beginning, you soon will be. After all, this is not marathon running; it is something you do every day. But you have to be prepared for the monotony of walking twenty kilometres in a straight line or the misery of walking all day in the rain.

I have touched on some familiar themes in this journal: on religion, on the open-mindedness of Europeans, and on the importance of the state's playing a central role in the lives of its people. I have also been reminded how important it is to have a satisfying job. I worry for future generations. Unemployment is certainly the most serious problem facing Europe today.

And now on a personal note...

Some wives wouldn't let their husbands go away for six weeks at a time. Others would be only too glad to get rid of them. My dear wife, Marcelline, falls into neither of those categories. Certainly, I'm not a model husband, but she's sort of got used to my being around. And yet she lets me go. I love her and I thank her. 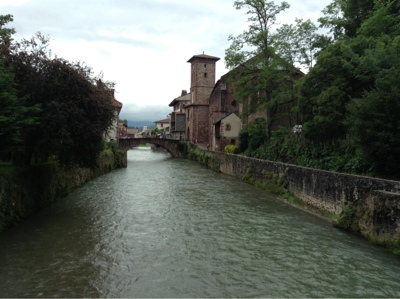 Posted by Carolus Peregrinator at 22:42