Every valley shall be exalted
Another thing that reminds me that I'm in France is the constant whine of the moped or high-revving little motor bikes that the youth like to ride. Give me the throbbing, throaty roar of a 1,000 cc unmuffled Harley Davidson any day. Perhaps I got a good deal on my hotel room because it faced the Main Street. In the evening I was disturbed by the bikes; in the morning I was woken up by the deep rumbling of the transport trucks.
On the way out of town, I had my coffee with Wifi at the very pleasant Bar Magnolia.
The day started badly and ended badly.
Just out of Dax, I had a choice. One arrow pointed straight ahead, the other to the right. A lady stopped her car and told me to go straight ahead. It's more interesting, she said. It was. A few hundred yards later I passed a sign saying, danger of flooding. But it was very interesting. I walked by a lake and along a stream. Then I came to a ditch with a sluice gate running at right angles to the path, but no way of getting across unless I tried to balance on the metal gate. I backed up, made my way across the steam and then approached the ditch from the other side. This I crossed by means of a fallen tree, scratching myself on the brambles in the process. Then, back on the trail, along a muddy path which led nowhere, then, backing up again, across a field of long grass to a marker I could see in the distance. This led to an abandoned orchard on the flood plain of a river where the undergrowth was so thick I had difficulty getting through. Finally, I climbed up some little-used steps and onto a bridge where I was back on the  road I should have taken.
After that harrowing experience, I stopped for a second coffee at Saint-Pandelon. Only 1€. It's been a while since I bought a coffee at that price.
Then it was a nice stroll along a minor road into Cagnotte, where I resisted the temptation to have the menu du jour at a restaurant. I had quite a long way to go.
I stopped to visit 11th century Abbaye-Notre-Dame-de-Cagnotte, simple and austere with its Roman arches and small side chapels. Churches have a smell about them - foxed hymn books, oak pews, incense and the stale aftermath of Sunday roast dinners - but this little abbey church simply smelled damp.
Just out of town, I met a man feeding bottles into a glass recycling bin.
I don't think I've mentioned these before. They are large, green and plastic, with one, two, or three holes in which to put the bottles or other recyclables. They often look like green monsters. Today there was a line of Cyclopes.
These containers for glass have been around a long time in France, long before recycling became fashionable. Back in the eighties, I used to think how enlightened the French were to have these recycling containers for glass, but they probably just needed somewhere to chuck their bottles.
We chatted for a few minutes, and I learned a new word. I asked him when I would get to the beginning of the Pyrenees. He said that I wouldn't get to the contreforts for a couple of days. Now isn't that interesting. A contrefort is a buttress, as in a flying buttress against a church, literally a "strong against". So the French see the little hills as buttresses supporting the mountain. We see them as little hills at the foot of the Mountain. Different images, that's all. But that got me thinking.
Although I am still in the Department des Landes, I have left the landes behind and I'm now walking in hilly country which I much prefer. Now we would call this country "hilly", but the French call it vallonne (with an accent on the "e".) It's the same country: where there are hills there are valleys. We emphasize the hills, they emphasize the valleys. Is this a result of a difference in our temperament? Does the one, with its connotation of steep ascents and craggy outcrops express the Anglo-Saxon, Protestant ethic of hard work and austere living, and the other, with its connotations of fertile valleys and food and wine, reveal the French taste for the good life? Just a thought.
I haven't been using my guide, because the way has been so well marked. So when I reached Peyrehorade, five kilometres before my destination, I just kept on following the coquilles, over the River Gave, across the plain and up the hill. Turned out, this was the route to follow if you didn't stop at my gite. I had to backtrack, and I had walked three or four unnecessary kilometres.
The gite where I'm staying is only a month old and quite high tech. The stove is so advanced that I couldn't use it. The controls are symbols on a screen that you press, but I couldn't work out what they meant. Words I can understand, but I have trouble with symbols. That's why I sometimes walk into the ladies' loo. The rooms have individual temperature controls and the bathroom has an electric towel-drying rack which I'm using to dry my clothes.
The abbey church at Sorde-Abbaye is as grand as the church at Cagnotte is humble. Unfortunately, after my wanderings in the wrong direction, I arrived too late for a serious visit. 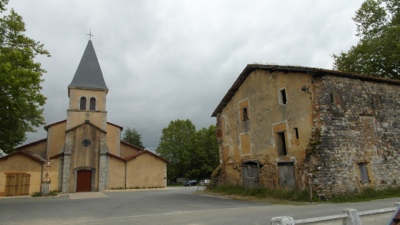 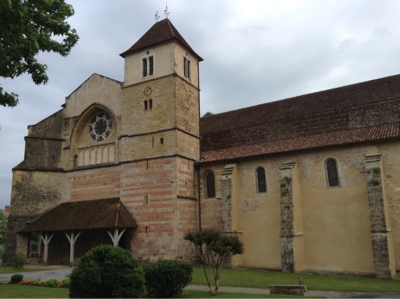 Posted by Carolus Peregrinator at 06:26