No man is an island, entire of itself
Yes, the chorus of snorers continued into the night. But then they stopped; for later, all was silent.
Curiously, snoring seems to be contagious. You never hear just one snorer, but always several, as if one has triggered off the others who then want to compete with the first. Perhaps there are mischievous incubi and succubi which enter the nasal orifices of the sleepers and possess them, causing them to manifest this unnatural behaviour which they later deny.
It was chockers last night with not only six of us in one small gite, but four bikes as well. Tonight at Pons I am sharing a large gite with the young Italian pilgrim. The gite is attached to, but not actually in, a medieval Hopital de Pelerins.
After I left town, I walked along the river for a while, then up a grassy lane, along the highway past an airforce base, and then across the fields for miles. No vines at first, just cereal crops. The sun was shining, the breeze was blowing, the birds were singing.
Oh, what a lovely walk!
And then later, on the higher slopes, the grapes. I was taking a short cut through some vines, and a car stopped ahead of me, at the point where I was to leave the vineyard. Was I going to get into trubs? No, it  was a former pilgrim who had done the Camino last year and wanted to chat. He put me onto a good spot to stay tomorrow night.
You can see from the photo at what time I left Saintes this morning. Imagine having that cathedral spire look over you wherever you are in the town!
I am convinced that even in this secular age it has an effect on the soul of the inhabitants. Consciously or unconsciously, as they look up at the tower and across at the Roman arch, they must feel a part of history. This afternoon, as I had a beer at a bar overlooking a medieval donjon in Pons, and watched a teacher leading a troop of tiny little kids around it, I thought the same thing: they must absorb history through their very pores.
Thus, without realizing it perhaps, they find their place in the vertical scheme of things. And in the horizontal scheme of things as well, as they encounter so many people from different countries passing through their towns. I find that more and more people in the towns I pass through speak English to me in an effort to be friendly and welcoming. Europeans have a sense of their community and their place among their sister nations.
I eat dinner on a patio overlooking the hotel de ville and the massive donjon. Rooks circle around the tower and seem to cling to the vertical walls as they find their nests within. Swallows swoop overhead. Raucous lads drink their beer down below. 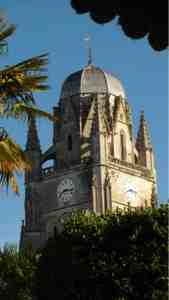 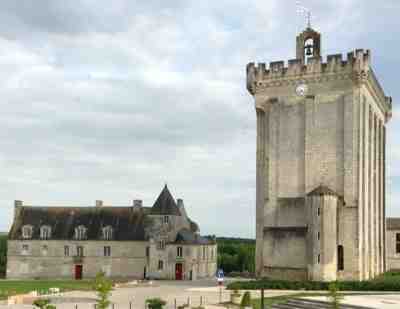 Posted by Carolus Peregrinator at 08:32