All we like sheep have gone astray
Isabelle asks her guests to leave by 7:30 because she has to go to work, so I made an early start.
The hawks were circling as I left, perhaps looking for little animals that had been flushed out of their burrows by the floodwaters. And the cows were lowing, as if anxious to be milked. Had the rain upset the farmers' routine? The night crawlers were out again, eighteen inches long, some of them, bait for a very big fish or lots of little ones. Unfortunately, being creatures of no brain at all, they crawl out on to the middle of the road and get squashed. A short life, but not a merry one.
There were menacing clouds behind me, but I thought the sky was lightening a little, and soon I could see little patches of blue, and little bits of the country spotlighted by the sun as it peeped through.
Evidence of the rain was everywhere. Low lying land was awash and the river had extended its floodplain into neighbouring fields. Soon I came to a sign which said that the road had been cut by flooding, but I followed a car along it and found that it was now passable. A little later, I left the bitumen and followed the coquilles up a rocky path, across some fields, and then down through a plantation of trees to a stream which I had to cross.
But the bridge, or rather, the plank, was down. One end remained on my side of the stream, which today was quite a fierce little torrent, but the other had been swept off the bank and rested in the middle of the stream. What was I to do? I followed the bank further upstream looking for a place to cross, but found none. I returned to the fallen bridge. The two guide rails would not have held my weight. I ventured down the plank to the middle of the river. It was too far to step to the bank, but I was willing to step into the water and then out onto the bank if I could manage it. I hesitated, but then decided that if it were deeper than I thought, and I slipped, then both my pack and I would be in the drink. Not good for my gadgets.
So I climbed up the hill and followed a track until I came to a road. Then I asked for directions and found I was only five kilometres from Saint-Palais by the highway. It could have been a lot worse. I walked briskly into town, bought some croissants, and had a coffee.
It's a long climb out of Saint-Palais, up and up, and just when you think you've arrived at the top, a little road to the left takes you higher still, and then down into a valley, and then in front of you is a stony road going up forever. I remembered this from last year, a road that goes straight up the cleavage plain of the shale or slate, the natural rock formation providing the surface for the road.
This is glorious country, wild and high, without heather but very much resembling the English moors, and the natural home for sheep, which were grazing everywhere. I sang to them, and told them that I too had gone astray. They feigned interest, but I could tell that they weren't really listening.
At the top is the Chapelle de Soyarce. Sitting on a bench in front of it were an English couple. He had walked the Chemin du Puy, and was showing his wife some of his favourite spots. On his Camino, he had got as far as a little town on the Meseta just after Burgos. He and his mate were resuming their walk in August. I didn't envy them walking across the plain in that heat. Mind you, who knows what the weather will be like this year. I took their photo, and he took mine.
After that, it was easygoing, downhill to Ostabat. There was no room at the inn where I wanted to stay, and not wanting to face crowds of Le Puyers at the gite, having become accustomed to having the gite to myself, I decided to walk on four kilometres to a hotel at Larceveau where I had stayed eight years ago when I was finishing the Chemin du Puy. It was new then, and is now a little the worse for wear. It is rare indeed to find a wall fitting that will allow a two-handed rather than a one-handed shower. 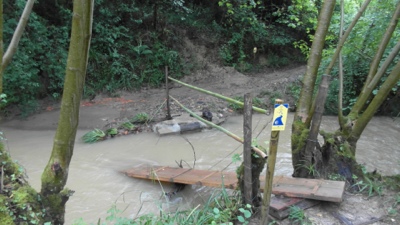 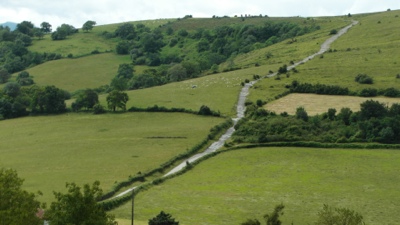 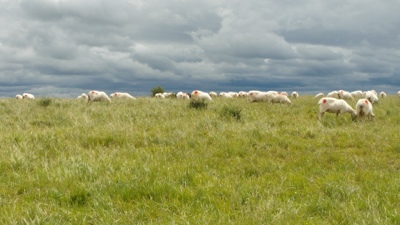 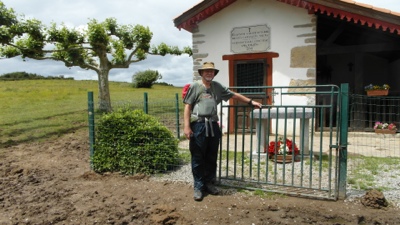 Posted by Carolus Peregrinator at 08:30