Drinking the blude red wine
As I walked from Le Bouscat to Gradignan, I was really spending a second day in Bordeaux, passing through the centre from one side to the other. I went by many of the places I had seen yesterday, not sorry to pay them a second visit. I must say that of all the big cities I have walked through, this was the most the most pleasant to get in and out of. Montpellier was the worst, difficult on both sides; Toulouse was was pleasant to walk into, along the canal, but very industrial on the other side.
I was delighted to pass by the Palais Gallien again, a misnomer, because it was never a palace, but wrongly identified as such centuries ago, and the name has stuck. Even what remains is a wondrous sight. Hidden away in the middle of a rather bon quartier, the equivalent of what my old Aussie mate George would call a leafy suburb, behind the stone houses sits in silence this magnificent ruin, once loud with the clash of armour, the roar of lions, and the cries of Christians. The whole structure remained until the 18th century, when most of it was demolished to make way for the expansion of the town.
For lunch, I bypassed the many bars and brasseries around the squares and found a humble little restaurant in an old stone building on the way out of town. I ordered le plat du jour, a couple of kebabs with salad and chips, and my usual quart de rouge. This aways comes in a little jug , but there is room for stinginess or generosity on the part of the establishment. One can fill it up to the neck or up to the lip of the jug. I pay great attention to this. When the wine arrived, I could tell I was in Bordeaux for the. wine was a deep red, and the level was closer to the lip than the neck. I was content. It was a very pleasant meal.
After that, it was an easy walk along a major road into Bradignan. I am staying at a gite in a former Hopital de Pelerins attached to a 12th century priory, which is in the process of being repaired. Tomorrow, I am back in the country. 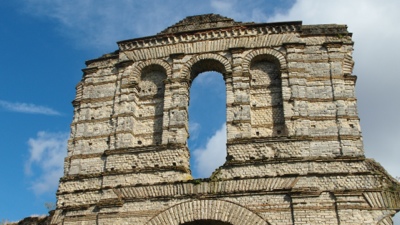 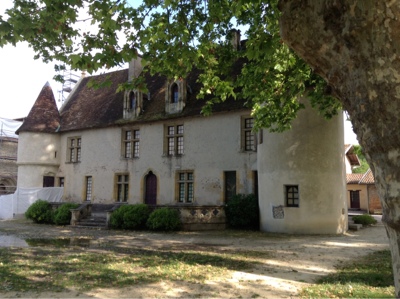 Posted by Carolus Peregrinator at 07:06