Two lengths of concrete stretched across the stream

To form a kind of bridge. Electric poles they were

That served to light the way for humble folk

In times gone by. But now, cast out, had found

Another use: To bear the randonneur

Across the stream. But who would chance his life

Upon this bridge? One pole was firm and flat,

If once upon its slippery slope I stepped,

Tumble would I into the rushing brook,

Weighed down with heavy pack and leather boots,

Alas, my garments heavy with their drink,

My iPhone looking up with sightless eye

Its texts unsent, its messages unread,

Its emails all unopened, for I’d be dead.

‘Twas quite enough to make a mortal quake.

I paused at length. Was it to end like this

In shame, in ignominious retreat?

No, my goodness, no. Cry ultreia!

Ambition should be made of sterner stuff.

And so into the woods I went to find

A stick, a branch, to brace myself against

A fall into the muddy brook. At last

A sturdy staff retrieved, return did I

To where I’d face my fortune, by and by.

I paused, and took a breath, and then at last

I screwed my courage to the sticking place,

And took a step, one foot upon the pole,

The other still upon the terra firm.

But now I had to chance the pole which angled

I paused, I stepped, I almost slipped, and then,

My staff embedded in the stream below

Another step I took and reached the Rubicon.

A moment’s pause, a sudden fear, a start,

And then, all caution to the wind, I leapt

And landed firm upon the other side.

My venture won, my trusty staff I threw

With careless arm into the air. It flew

And splashed into the stream, its duty done.

And then, all cock a hoop, I hurried on. 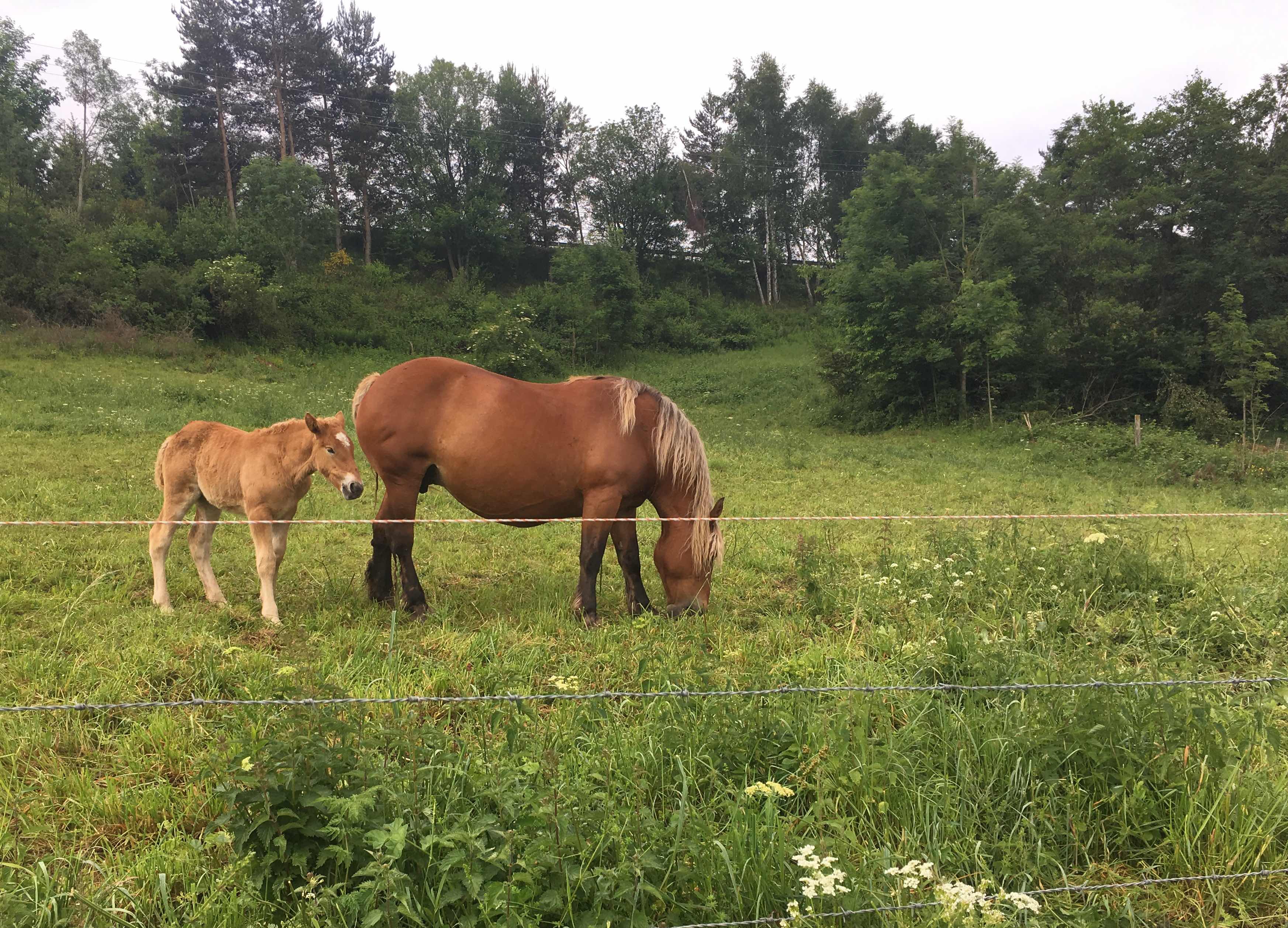 I set out early this morning, 7:45, in fact, after a couple of croissants from the bakery and a coffee at the bar next door. Along the highway and off on a dirt road, down the valley towards a stream. And there I crossed another bridge made of discarded electric light poles, this time, four in number and firmly embedded in concrete at either end. This was how it should be done. I revisited my earlier crossing, and this occupied me for most of the morning. 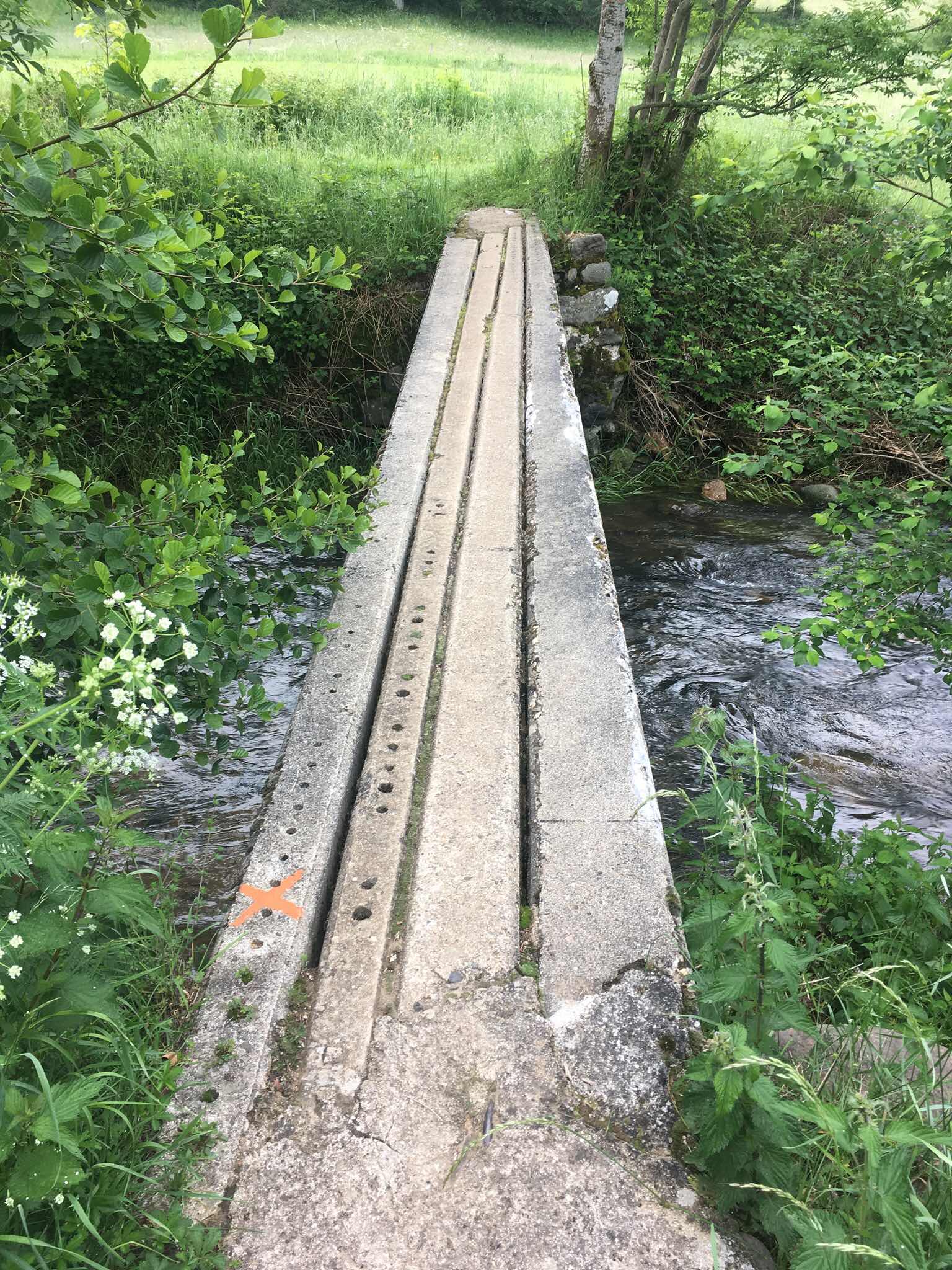 I climbed steadily along the side of the valley which eventually opened out into a large plain, dotted with little villages and lined in the distance with low hills

Once I had to stop and wait as a family moved their cows across my path from one field to another. Most would follow the others, the big animals lumbering across, the little ones putting on a bit of a gallop. But not all. A few recalcitrants in the corner of the field refused to budge and a farmer had to go and move them along.

A little further on I arrived at Saint-Germain-Laprade. On one side of the valley was the town, the older buildings clustered around the church, with more modern housing on the outskirts. Further along was the petro-chemical industry: storage tanks, long, low factories, a chimney emitting steam. No pretty, but it kept the town alive.

The church was interesting so I decided to take a look. The door was closed, but I tried it any way, pushing against it, expecting it to stop against the lock. It sprang open with a clang, startling the parishioners within. It was Sunday mass and the church was full to the back pew. I backed out apologetically. 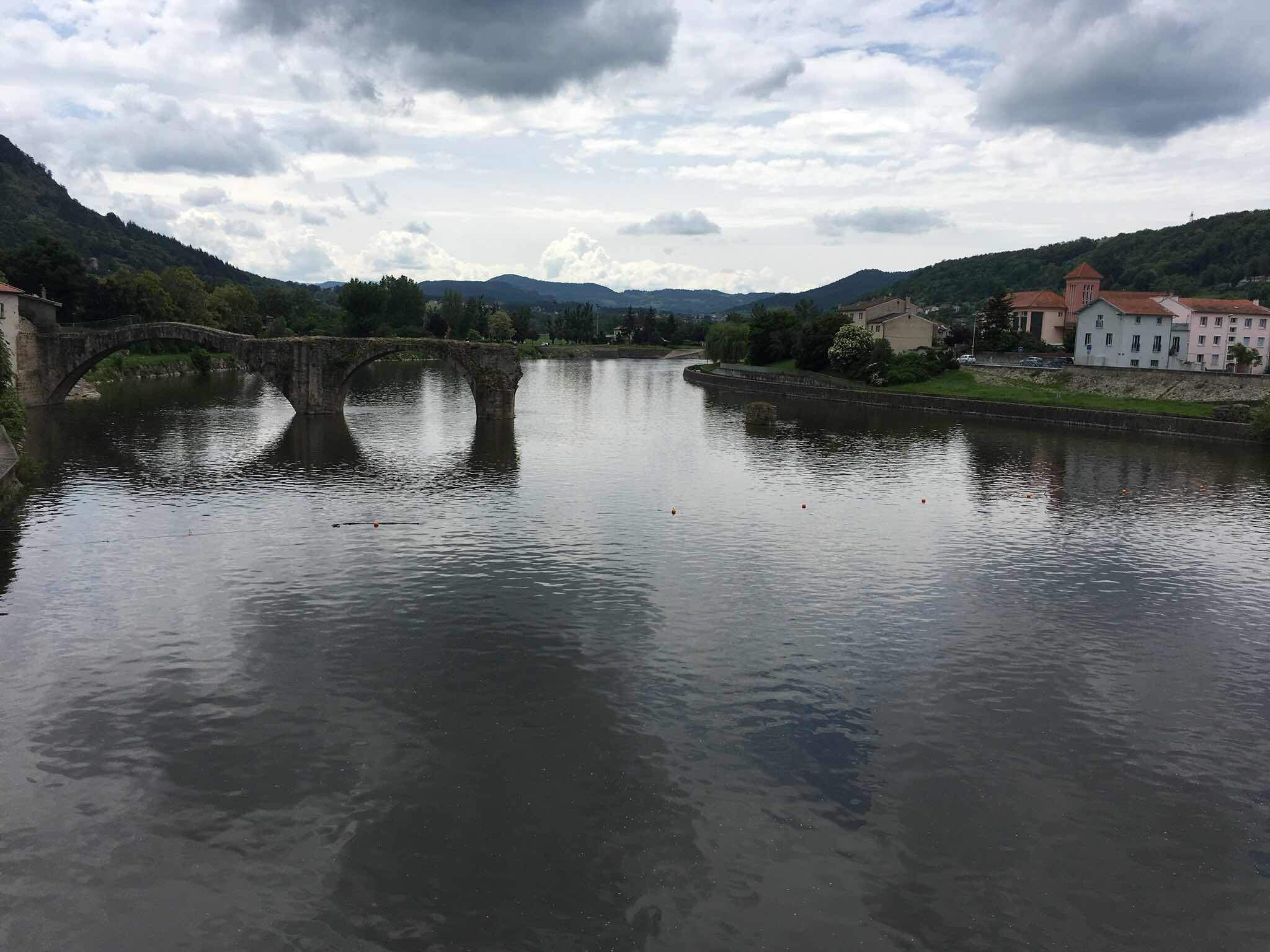 A few kilometres on, I arrived at Brives Charensac. And a surprise: the Loire. It was not the first time I had crossed it on a walk. Nor was it the first bridge to nowhere I had seen across the river.

And then I walked along its bank, and that of its tributary, la Borne, to Le Puy-en-Velay. One more hazardous crossing, ignoring the “prohibited when under water” sign. And forgive me, but once again, dear reader, I remind you that such a crossing would not be possible in anything but serious leather boots. My feet were as dry as a bone. But yours, in runners or light hiking boots? 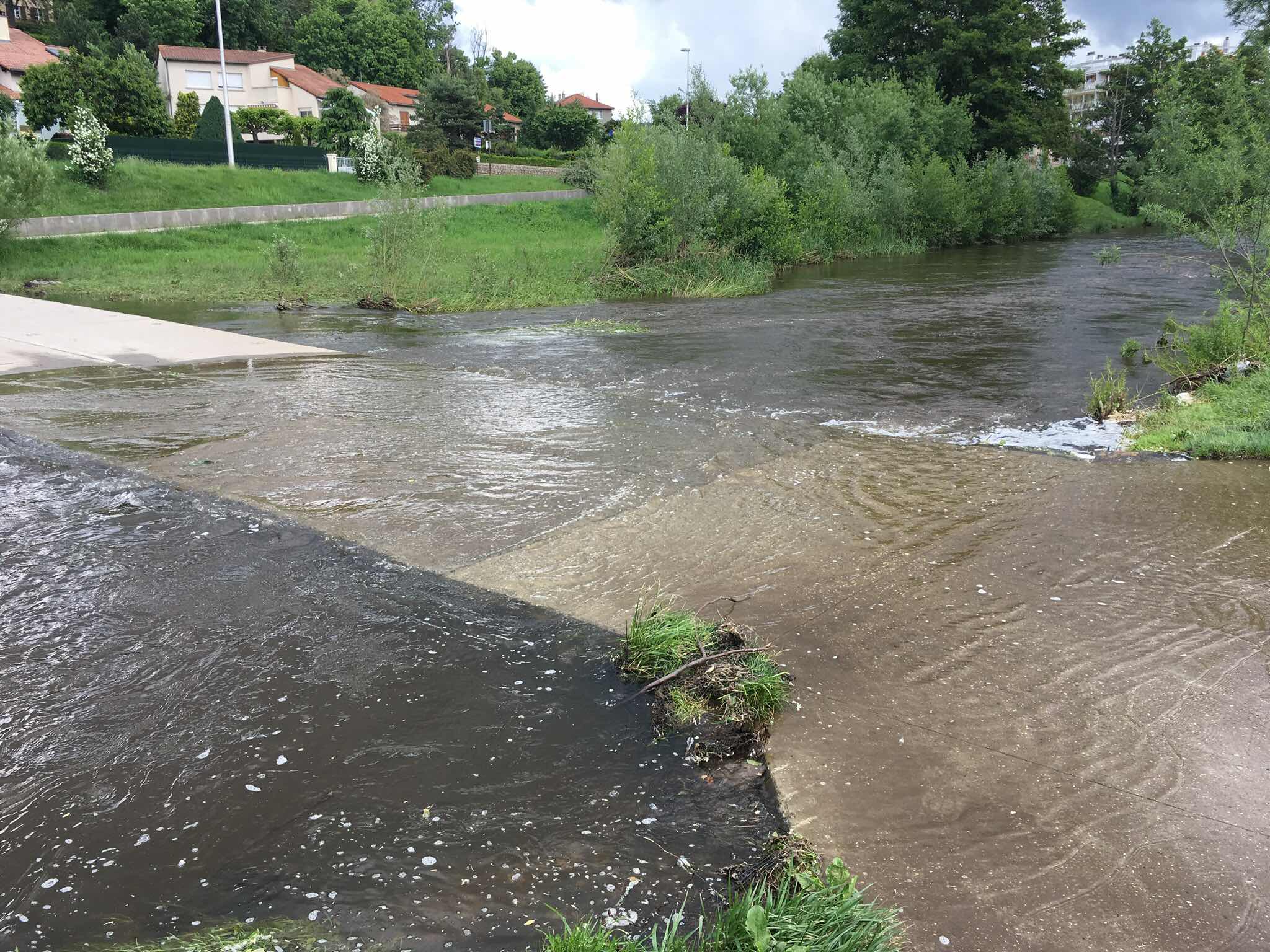 In the past, I have arrived at Le Puy by train and walked past all those hotels with their magnificent towers to the old town, the cathedral, and the nearby pilgrim gîtes. This time, I arrived from below and saw how the old town is dominated by the golden statue of the Madonna and Child, and the amazing Chapelle Saint-Michel surmounted on the rock. 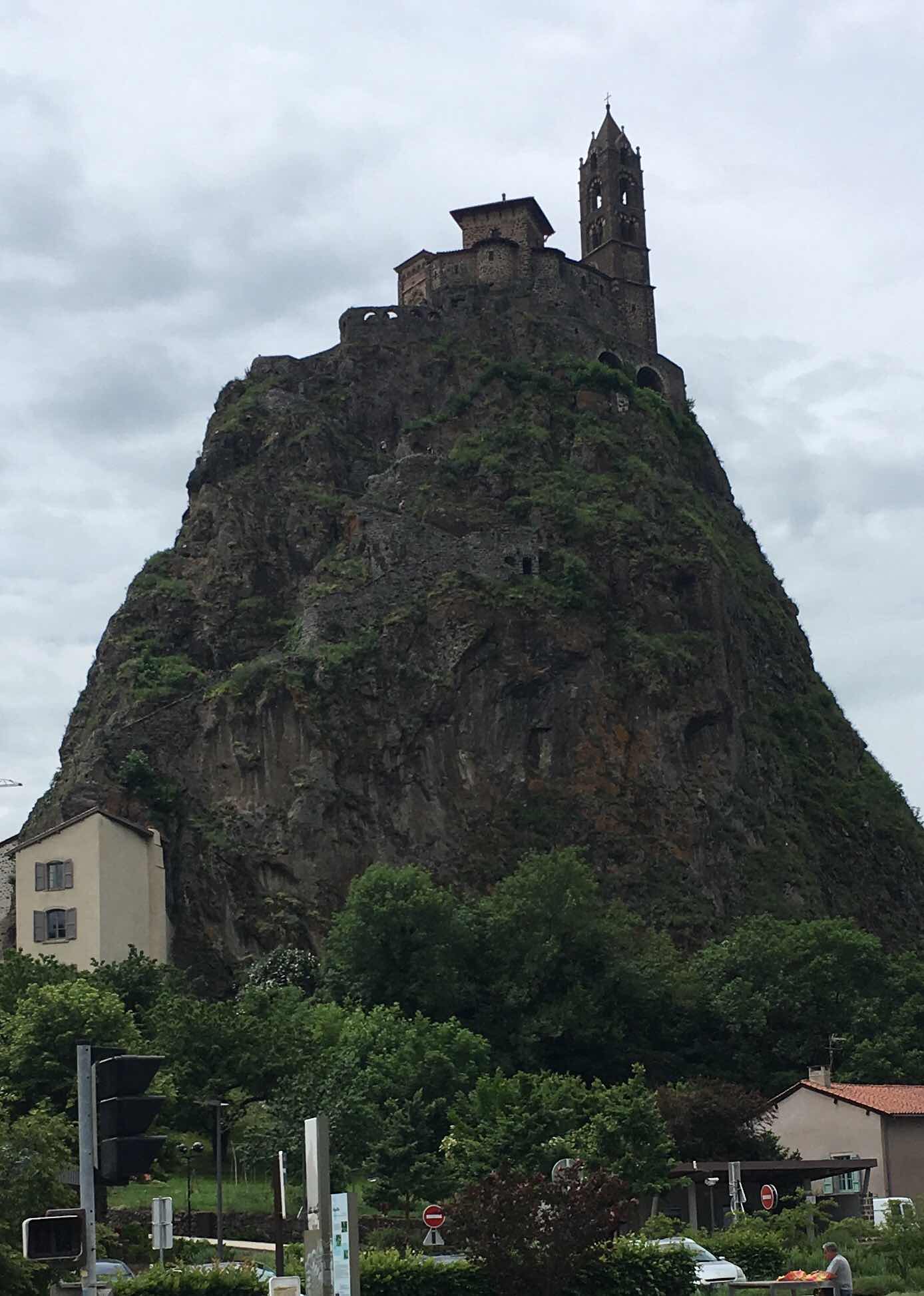 I shunned the pilgrims’ quarters around the cathedral, thinking that I had earned myself a night in a hotel. I am staying at the Ibis, opposite the station, and have enjoyed a shower, both hands free, without having to press my back against the tap to keep the water flowing, and with water warm enough to enjoy a prolonged experience.

Posted by Carolus Peregrinator at 13:55